- April 20, 2012
Once upon a time, I found a group on Facebook called Praying for Layla Grace, about a young girl suffering from terminal cancer. I blogged then about how stupid prayer is, and unfortunately her tragic and untimely death only cemented in my mind what an utterly ridiculous charade praying for sick people really is.

Tonight, I spied (through a friend who is a pastor) a very similar group, called Prayers for Lane Goodwin. Like Layla Grace, Lane is suffering from a rare and deadly form of cancer. I took a couple snapshots of the page, to give you a sense of what the mindset is: 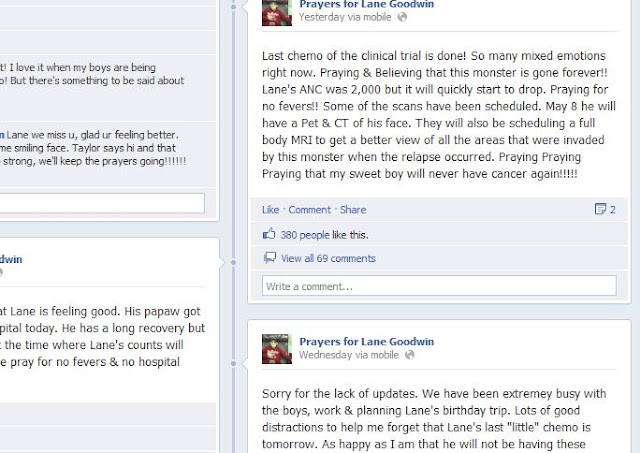 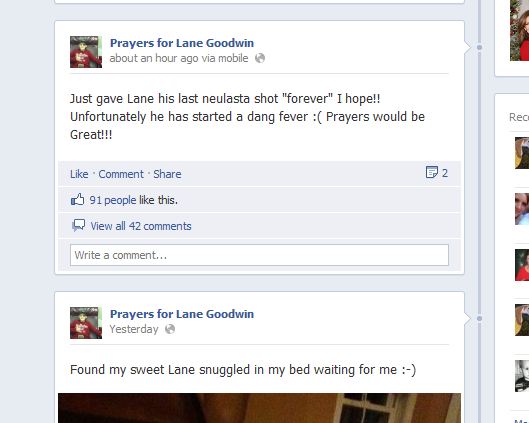 "Praying and believing" that the cancer is gone forever? I'm gonna go out on a limb here and guess that they probably "prayed and believed" that back in 2010, when his cancer went into remission before it ultimately returned. And I posted these two particular shots for a reason – the first specifically says that they're praying for "no fevers", which is shortly followed by the news that he has a fever. The solution? Why, more prayers, of course! Makes perfect sense.


This raises all kinds of questions that should be blatantly obvious to anyone who hasn't completely drank the Kool-Aid:
If Lane recovers, as surely we all hope he will, God will get the credit. He answered their prayers! If Lane dies, God will still get the credit – "it was just God's plan". Well, dipshit, if it's part of God's plan, and God is all-knowing, then why the hell are you praying to him? He obviously knows more about the situation than you possibly could, and he has a plan in place that he's going to follow regardless of whether you pray. Wouldn't be much of a Perfect Divine Plan if God had to change it every time someone wanted something, would it?

Here's the good news: prayer has no effect! That means you can spend your time doing more productive things that might actually help. Like, say, donating to cancer research or helping the Goodwin family with their medical bills.


I think this kind of prayer is a relic from ancient religions in which various gods were thought to be in control of the minutiae of daily life, and gods inflicting people with undesirable things could be appeased with pleas, worship, and sacrifices. It's stupid, it doesn't work, and it just distracts people from spending their time doing things that could actually help. If Lane does recover, it won't be because of prayer – it'll be because while anyone with this cancer just a few decades ago would have surely died, he's the lucky recipient of a litany of 21st Century cancer treatments developed by scientists and administered by doctors.

I have to add that I don't think this kind of prayer is harmless. It gives people false hope. It forces people, when they don't get what they desire, to defend God instead of grieve. And it coerces people into blaming themselves – that if only they'd prayed harder, if only they'd had more faith, things might have turned out better. It's bullshit. Things happen. Terrible things. There's no rhyme or reason to it. It's no one's fault. We just have to deal with it as best we can.