William Lane Craig tries to be a physicist... again

- June 09, 2012
Morbid curiosity, as it sometimes does, led me over to the ironically named website of William Lane Craig Reasonablefaith.org. I noticed he had a podcast about the recent PBS series with Brian Greene called The Fabric of the Cosmos (no doubt pulled from Greene's book of the same name). I decided, hey, what the hell, I'm just sitting here doing drills on my guitar... I can listen to it. So I did.

I expected that Craig would, as he usually does, say plenty of things that are true... and then mix in plenty of pure, unadulterated bullshit. I expected that he would distort the science to fit his religious agenda. And I was right on both counts.

It's a fairly long (3-part) podcast, and I'm not going to go through every little point, but I want to touch on some broader concepts where Craig really lights up the crack pipe.

Craig likes to contend that physicists are really out of their league when asking "big questions". He thinks that's a domain best left to philosophers. In this case, the question is: What is time. Well, that's kind of a complicated question. But the short of it is that Craig, as he often does, argues for something called an "A Theory" of time, or "tensed" theory of time. This basically says that there is an absolute reference point by which all relative time is measured.

It's worth noting that this "A Theory" of time, or "Lorentzian" interpretation of Special Relativity is based upon a concept that has been stuck in the trash bin of physics for over a century: the luminiferous aether. The aether was supposed to be this substance that permeated all of space, which served as an absolute reference point for bodies in motion. Einstein, in showing that the speed of light remains the same for all observers, proved that the aether doesn't actually exist. From Wikipedia (emphasis mine):


Today LET [Lorentzian Ether Theory] is often treated as some sort of "Lorentzian" or "neo-Lorentzian" interpretation of special relativity. The introduction of length contraction and time dilation for all phenomena in a "preferred" frame of reference (which plays the role of Lorentz's immobile aether), leads to the complete Lorentz transformation. Because of the same mathematical formalism it is not possible to distinguish between LET and SR [special relativity] by experiment. However, in LET the existence of an undetectable ether is assumed and the validity of the relativity principle seems to be only coincidental, which is one reason why SR is commonly preferred over LET.

In other words, this "interpretation" of special relativity, as Craig calls it, requires the assumption that this "aether" actually exists. Plain old special relativity does away with this assumption and works just as well as LET, thus there is not a legit physicist in the world who actually thinks the "aether" really exists, which is required for absolute references in space and time. That's Occam's Razor for you: do not multiply assumptions beyond necessity.

Craig then goes on to say that recent "evidence" has supported the Lorentzian theory of time: namely that neutrinos were measured traveling at faster-than-light speeds (fancy term: "superluminous velocity"). Except there's a slight problem with Craig's "evidence": it was thoroughly debunked as a measurement error. But of course, Craig doesn't bother mentioning that inconvenient detail.

Craig needs to think a little more critically (okay... a lot more critically) about Stephen Hawking's concept of model-dependent realism. Craig says that there's a difference between actual time, and us measuring time. Okay... so, how do we know what this "absolute" standard of time actually is? Do we measure it? Oops. I'm gonna pull out the Hawking quote of the day here. As you may recall, Stephen Hawking, unlike William Lane Craig, is an actual physicist:


"There is no picture- or theory-independent concept of reality. Instead we will adopt a view that we will call model-dependent realism: the idea that a physical theory or world picture is a model (generally of a mathematical nature) and a set of rules that connect the elements of the model to observations. This provides a framework with which to interpret modern science."

"According to model-dependent realism, it is pointless to ask whether a model is real, only whether it agrees with observation. If there are two models that both agree with observation ... then one cannot say that one is more real than another. One can use whichever model is more convenient in the situation under consideration."

Craig wants to believe that there is some sort "absolute" reference point for all of spacetime, even if we can't measure it or observe it. Why? Not because there's a lick of evidence for it, not because any actual physicists think it's true, but because his stupid theology requires it. Seriously: this guy is advocating the adoption of a theory that's been in the trash bin for over a century just because his theology needs it. Pathetic.

And what really grinds my gears is that Craig tries to portray the contrary position as fringe, as if his view reflects that of mainstream physicists. Really? Craig's actually advocating a philosophy that is based on the existence of the luminiferous aether, and he's calling Brian Greene's perspective fringe. What a choad.

I'll blog more about this later, but this is enough for now. This all reminds me of a quote from Richard Dawkins I stumbled across earlier today: 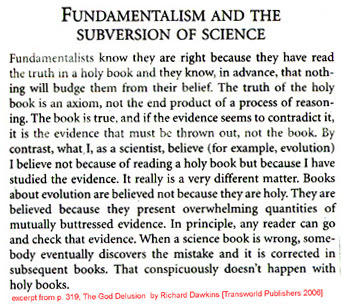 I should remind readers that Craig is a gnostic theist, and in his own words has proved Dawkins correct:


"....even in the face of evidence against God which we cannot refute, we ought to believe in God on the basis of His Spirit's witness."