A quick thought on Chik-Fil-A

- July 27, 2012
I love that the Jim Henson Company withdrew their toys from the restaurant after the CEO's bigoted, idiotic remarks (and how Chik-Fil-A was caught red-handed lying about it). I love that people are protesting and, y'know, not eating there. 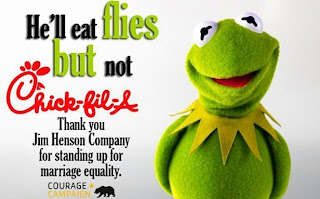 I'm not really a fan of mayors or other government figures interfering with free commerce. If someone wants to open something like, I dunno, The Klu Klux Klan Steak Soup and Sandwich Co., they have every right to do that. And people who have a problem with their viewpoint do not have to support them.

I think that it may be lost that Chik-Fil-A, to my knowledge, does not require its employees or managers to affirm their opposition to gay marriage in order to be hired. Most people who have such jobs are probably just normal folks trying to make ends meet. The personal politics of the CEO really aren't anyone else's business. That's not to say I don't think that his remarks warrant a boycott by conscionable people, because they do, but it's naive to blame the whole chain for the remarks of one douchebag millionaire.

Personally, I avoid Chik-Fil-A mainly because it's shitty food.