Whenever I see stuff like the video below, in this day and age (as in, not the 1980s) I keep thinking it's gotta be a joke. Surely no one is really this deluded. But yes...

The anthropologist Pascal Boyer, in his book Religion Explained, contends that it's a myth that people believe in religion because it gives them comfort. The reason is that religious beliefs themselves function by fabricating a pathology, and then offering a cure from their own disease.

Think about Christianity: its fundamental doctrine is that you are corrupt. You deserve to burn in hell for all eternity. And it's not necessarily anything you did – you were simply born this way, as a fallen sinner. There's nothing you can personally do to change your fate – no good deed or life well lived can save you; only by accepting Jesus as your savior can you be saved from the horrible fate you were thrust into simply because of your mere humanity. 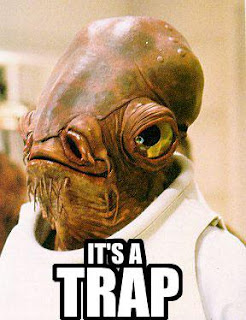 The practice of religion is the same. Believers see themselves as being under constant threat from the rest of the world, from demons or other malicious spirits, from worldly temptations of all kinds, etc. etc. Witness, for example, the hilariously dumb "Christian side hug" that some churches promote because they're just that scared that hugging someone will lead to promiscuous sex.

Which brings me to this video I saw earlier today. Being a metalhead to the core, I can't help but chuckle a little at the sheer stupidity on display here. But more so, I just don't envy these Christians at all. They live in constant fear of the world around them. It's them vs. everyone else. What a shitty way to live.