Knowing what you're paying for

- July 30, 2012
I'm a guitar player. And I've noticed over the years that guitar players have a tendency to really fuss over elusive, high-priced gear. Hand-wound pickups, hand-wired "boutique" tube amplifiers, and USA-made guitars.

So recently, on a forum, I spied this sexy custom Jackson seven-string: 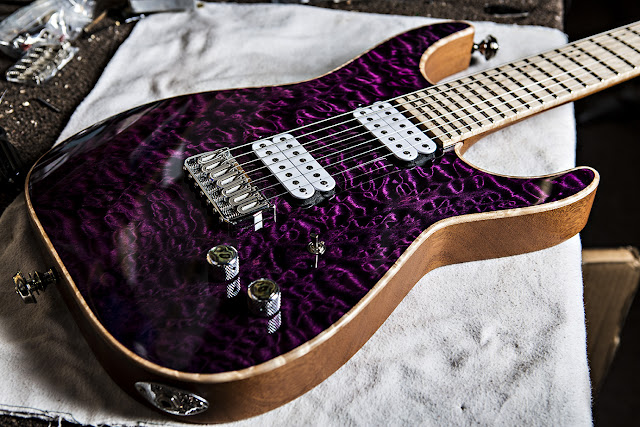 Like, damn. Clearly this is a very unique and beautiful axe. And if you think the price tag on this guitar would probably be a smidge high, well, you'd be right. Custom Jacksons, even with relatively simple appointments that aren't much different than their production guitars, can easily run $3500-$4000. I have no idea what this fellow paid (it belongs to Chris Letchford of the band Scale The Summit), but I think $5k would be a reasonable, possibly even conservative estimate.

Now, one might think that in paying for a guitar like this, you're paying for unmatched quality of materials and workmanship. And, to some extent, that's true – this ought to be about as good as it gets. But the truth is that figured woods can only be so figured (they're usually graded on a 1-5 scale, like "4A"); frets can only be leveled and crowned so perfectly. In those terms, a high-end production or semi-custom guitar costing much less can objectively match the quality of a guitar like this.

When someone buys a guitar like this, there are several key factors that drive the price:
Alright, so, why am I talking about this? Because I've bought several guitars from Carvin, a US-based company that makes semi-custom guitars. You cannot nitpick every possible feature, but you have an impressive range of options from which to choose. Carvins are made in the US, which will make them more expensive than Asian-made guitars. They also use top-end materials and have exceptional quality control. But they sell direct, avoiding the retail markup, so their prices are relatively low given the quality of materials and options available.

Here's a pic of my previous Carvin: 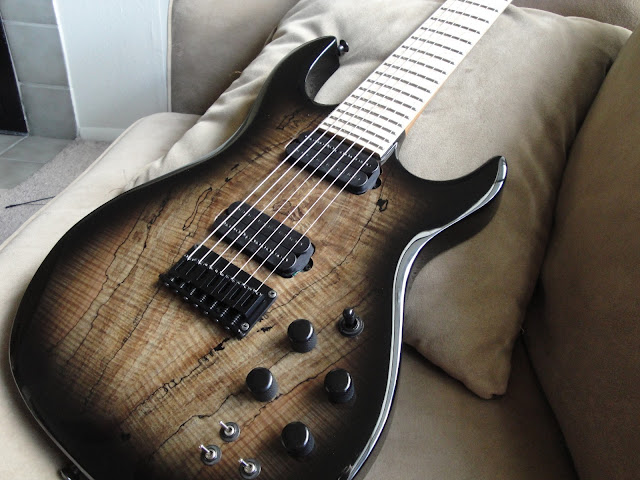 Crappy point-and-shoot camera not withstanding, you should get the idea. The top wood, spalted maple, is highly figured and was quite expensive. The neck and body were made from koa. All the wood used in the construction was more rare and (generally) expensive than the wood used in the above Jackson (mahogany and quilted maple). The fingerboard and frets are made of the same materials – birdseye maple with stainless-steel frets. He opted for inlays, but I prefer the no-inlay look. 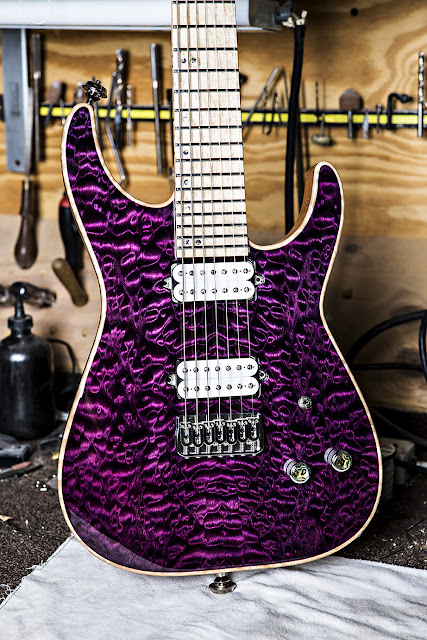 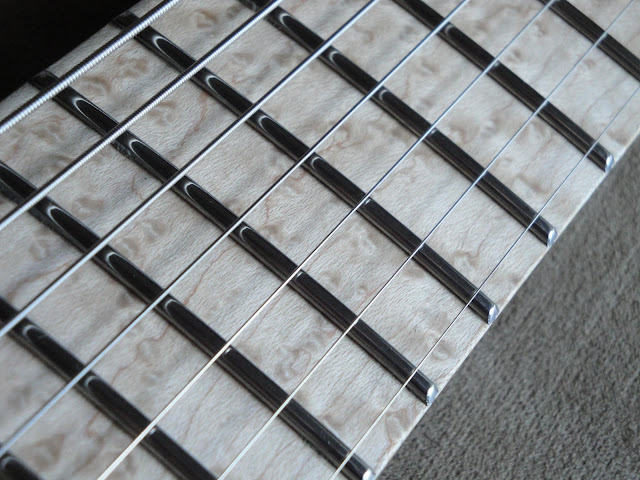 So how much of a price different is there between these guitars? I paid around $1900. Since then they've released a new seven-string model, and the price on this model has gone down. It could probably be had for around $1600 – nearly a third of the cost of the fully-custom Jackson. And just for kicks, I used the online builder to construct a guitar with virtually identical options as the custom Jackson – right down to the abalone inlays in the knobs – and it cost a little over $1500.

When you pay for something like the custom Jackson, you're paying not for a corresponding increase in the quality of materials and workmanship, but for the unique and fully-custom nature of the instrument. As nice as my Carvins have been, the options are relatively limited compared to the virtually limitless possibilities offered through Jackson's full-custom shop.


I'm bringing up this whole topic because, when I mentioned on the forum that I'd spec'd a highly similar Carvin that would cost vastly less money, one of the members – well-known for his love of Jackson guitars – said, "If you could buy 15 Honda Civics or a single Ferrari, which would you get?" But a more apt analogy would be buying a fully custom Ferrari for $500k, or a semi-custom one for $150k.

In any case, people have a tendency to believe that if you're spending more money, you must be getting something that much better. But it's nonsense. There's an old pricing strategy called "prestige pricing" – it's when you price something about as expensive as you can get away with, and sell it based on the idea that it's a luxury item of unmatched quality. In truth, the differences between the 'luxury' item and significantly less expensive items of the same kind are in most cases fairly slight. To use another guitar analogy (it's what I know, okay?), there's a company called ESP Guitars that carries many 'signature' guitars designed and endorsed by various artists. In most cases, there's a Korean-made version of the guitar, and a Japanese-made version. The Japanese-made version is usually substantially more expensive, but in most cases people have a difficult time discerning the practical differences between the guitars.  The same is true with Gibson USA guitars and Epiphone guitars; high-end Epiphones have few practical differences from the USA-made Gibsons, but they cost much less because they're made in Korea.

The moral is that buying behavior is not rational. People will pay more for a product if it's perceived as special, unique, luxurious, or rare – even if, practically speaking, the differences in quality are few compared to cheaper but more common items of the same type. This irrational behavior helps explain why economists are so incredibly terrible at predicting changes in the economy, and it explains why someone can think that a guitar that costs three times as much must be three times better.