People see an angel in Aurora

- July 24, 2012
KOKH FOX 25 in Aurora, CO, is reporting that there has been a huge response to a picture they posted of the theater where the shooting occurred, with many people saying that they "can see the outline of an angel in the clouds above the theater."

Okay, so, here's the image: 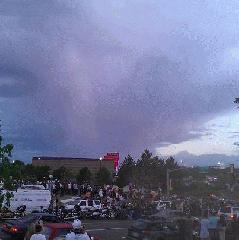 Yup, that's clearly an angel. Or the Eye of Sauron. Or... some clouds.

This is yet another fine example of how dumb people can be when they're up to their ears in religious delusions. Hey, maybe instead of hovering over the place in the clouds, that angel could have gotten off his ass and stopped the shooter before he killed a bunch of people.