Rick Warren says Aurora shooting is because we teach evolution

- July 21, 2012
The Onion's article proves true again (see previous post) with another stupid quote from a religious nut. This one is from Rick Warren, author of the Christian bestseller The Purpose Driven Life. This is his Tweet: 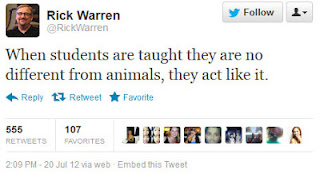 Sigh. I could go off on this one, but I already saw a great response from Youtuber Evid3nc3, via his Facebook page:

The theory of evolution in no way diminishes the differences between humans and other animals. It is easily verifiable that humans are substantially more intelligent, empathetic, and thoughtful than other animals. Just because we share a common ancestor with vicious animals in no way means we have to act like them. To the contrary, it is precisely because we have evolved larger brains than vicious animals that we can recognize this behavior as destructive to our future survival. And survival is what evolution is all about.

I would also add that, as Frans De Waal has often said, most species survive through interdependent group living, not through individual conquest. Animals – especially primates – share food, divide labor, care for the sick and wounded, and mourn their dead. Our ability to empathize and sympathize with each other forms a continuity with our evolutionary ancestry – it's not something we invented.