I'm not always on board with those billboards

- August 25, 2012
For the most part, I like American Atheists' billboards. The ones that say, "You know it's a myth – this season, celebrate reason" are great because they're targeting closet non-believers. For the most part I enjoy the almost panicked reaction from Christians who are so accustomed to their beliefs being unchallenged that any public display of dissent or criticism is viewed as hostile and, if you watch Fox News, anti-American.

But this one in particular, which just got taken down after various threats were made, rubs me the wrong way: 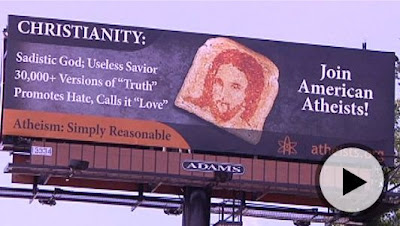 Lots of this is true. The Biblical god is a sadist. There are well over 30,000 denominations of Christianity, at least according to the almighty Wikipedia. But I suppose it's the last one that kind of rubs me the wrong way. It's cryptic. It doesn't jive with the recorded words of Jesus which, fictional though they may be, didn't promote "hate". And if it's the actual Christians it's talking about, well, plenty of them don't hate anyone.

Calling the savior "useless" is also inflammatory and, without any context, makes for a rather uninspired mockery of faith. I much prefer something like this, which sarcastically but accurately summarizes what you actually have to believe if you are a Christian:


Christianity: the belief that only God's own magic blood was powerful enough to save humanity from a curse he placed on it when a woman made from a rib was tricked into eating a magic apple by a talking snake, so God created a body for himself and then killed it to appease himself.

See, most Christians don't want to think about the inanity of God sacrificing himself to himself to free us from a curse he put on us, and they don't want to consider that the two people supposedly responsible for the fall of humanity never actually existed.

So yeah, let's mock Christianity. It's fully worthy of a little well-placed scorn from time to time. But most Christians are normal, nice people, so let's try not to be total dicks about it.