- August 13, 2012
Religious people, for whatever reason, like to quote Einstein. I suppose they imagine that some of his comments that seem pro-faith give a boost to religion by having a super smart guy in its corner. I'm talking about stuff like this: 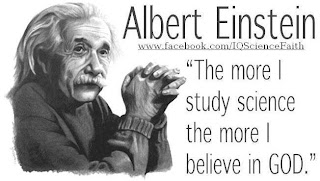 Let's ignore the fact that, like lots of quotes attributed to Einstein, Einstein never actually said this. Ever. At all. Turns out that a quick Google search reveals Albert Einstein to be a veritable treasure trove of bogus quotes. That's the problem with the internet: people just share stuff without sourcing it.

First of all, it doesn't matter what Einstein thought about religion. He was a brilliant physicist and undeniably a smart fellow, but that doesn't preclude him from being wrong from time to time. Let's not forget that after Isaac Newton discovered the laws of motion, the laws of optics, universal gravitation and differential calculus, he spent the rest of his life dedicated to the pseudoscience of alchemy. When you resort to the old "See, Einstein was a brilliant scientist and he believed in God!" you are, at best, falling into an old logical fallacy known as (you guessed it!) the appeal to authority.

But more to the point, Einstein wasn't exactly a friend to religion, and he was especially not a fan of Christianity. In fact, it's kind of hard to discern exactly what he did believe, but he was absolutely clear on what he thought of the idea of a 'personal God' a la modern Christianity (from Wikiquote):


Nobody, certainly, will deny that the idea of the existence of an omnipotent, just, and omnibeneficent personal God is able to accord man solace, help, and guidance; also, by virtue of its simplicity it is accessible to the most undeveloped mind. But, on the other hand, there are decisive weaknesses attached to this idea in itself, which have been painfully felt since the beginning of history. That is, if this being is omnipotent, then every occurrence, including every human action, every human thought, and every human feeling and aspiration is also His work; how is it possible to think of holding men responsible for their deeds and thoughts before such an almighty Being? In giving out punishment and rewards He would to a certain extent be passing judgment on Himself. How can this be combined with the goodness and righteousness ascribed to Him? The main source of the present-day conflicts between the spheres of religion and of science lies in this concept of a personal God.


I do not believe in a personal God and I have never denied this but have expressed it clearly. If something is in me which can be called religious then it is the unbounded admiration for the structure of the world so far as our science can reveal it.

It's also clear, however, that while he was not a religious man himself, Einstein – unlike the famous nontheist scientists of today such as Dawkins and Hawking – didn't necessarily see religion as a bad thing, but he seem to regard it as a sort of refuge for the unsophisticated. Perusing his quotes reveals him to be some sort of deist or pantheist who flatly rejected the notion of a personal God but believed that there was something of a supernatural clockmaker behind the universe itself. And if some of his quotes seem somewhat in conflict with each other, then it seems as though he became a bit more charitable toward religion in his later years – but didn't change his personal views on God.

And that's really about it. There's not much point in trying to meticulously dissect Einstein's thoughts on religion, because it doesn't matter. He was a Jew born in overwhelmingly Lutheran Germany, so of course it's likely that he had some deep thoughts about the gods of Western Monotheism. But he could also have a been a Buddhist, a Jainist, an agnostic, or an atheist. Whatever he believed, his thoughts don't get a free pass  from skeptical criticism just because he was a brilliant mathematician.