The problem of suffering... redux

- August 12, 2012
Long ago – actually, back when this blog was still called The Apostasy – I did a post called The Problem of Suffering. To this day I'm very proud of it; while I might add to or revise many of my older posts if I were to write them now simply because of all I've learned, that particular post is one that I think still holds up as well as the day I wrote it.

At the top of the site page, there's a tab for something called The Gospel Challenge. It was a post that I wrote that I felt concisely summarized my objections to the claim that the gospels are divinely inspired, and I felt it worthy of sticking up as a fixture to the site (since the overwhelming majority of my theist visitors have been Christians). I'm going to do the same with the content that follows here.

I've been thinking about the problem of suffering again, prompted by William Lane Craig's recent lecture on the topic here in Tulsa, along with a recent article penned by Oxford theologian Alister McGrath. I want to revisit the topic and, as concisely as I can (since my original post went pretty in-depth) illustrate what I think is the key argument at hand, and why it is a serious problem for theism.

But first, a slight digression. The problem of suffering is often conflated with the 'problem of evil', but they're different arguments. I've never liked the term 'evil' anyway; it's just too loaded and too vaguely defined. When discussing human behavior, I like to use the terms 'kind' and 'cruel' instead of 'good' or 'evil'; and when talking about the 'problem of suffering', I'm specifically talking about natural suffering rather than acts of cruelty of humans against each other. That's because I can accept the theistic argument that a consequence of God creating us with volition (I'm avoiding the loaded term 'free will') is that we may choose to act maliciously against each other. However, natural suffering is a different issue that encompasses the suffering inflicted upon conscious creatures by exposure, predation, famine, disease, disasters, etc. A child dying of cancer, for example, endures great suffering, but her condition was not thrust upon her by the cruelty of any person. The question of why God would allow such a thing to happen is the heart of the problem of suffering.

And one more thing. The problem of suffering is not an argument against the existence of any god at all – particularly just some vaguely defined 'higher power', like a deistic god; rather, it's an argument the idea of a particular kind of god – particularly the kind that Christians believe in – that is both omnipotent and omnibenevolent is logically incoherent given reality as we observe it. In other words, it's an argument that a theistic god is a self-defeating concept.


The problem of suffering

The problem of suffering was very concisely summarized to me by a reader, whose comment I am going to paraphrase and expand upon (credit where credit is due). 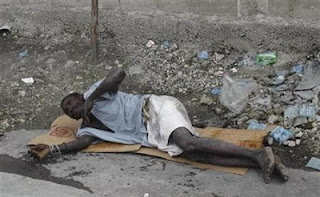 William Lane Craig argues that it is the burden of the atheist to show that it is "highly improbable that God could have a morally justifiable reason for permitting this to occur." It seems irrelevant whether we would actually know what the reason is; the believer simply has faith that God has his reason, and the atheist must show that the believer's faith is ill-founded. But I am going to go a step further than arguing that it is improbable; it is impossible for an omnipotent, omnibenevolent being to have a justifiable reason for permitting suffering to occur.

We only view suffering as justified when inflicting suffering of lesser weight is deemed necessary to prevent suffering of greater weight. A common example would be vaccinating an infant – the pain inflicted by the needle causes some suffering, but by preventing the child from contracting measles, small pox, etc., we are preventing vastly greater suffering.

A more extreme example would be the bombings of Hiroshima and Nagasaki; the US inflicted great suffering upon tens of thousands of innocent men, women and children – many who died very slow, painful deaths from radiation poisoning. But this act was viewed by the US as justified suffering in that by forcing Japan to surrender, we prevented the war from being prolonged indefinitely – which would likely have included a bloody invasion of Japan. The bombings, though atrocious, were seen as the lesser of evils by preventing even greater suffering.

However, if we could achieve the same end with a means that entailed no suffering, then that is always the preferable path to take. If we could have found a diplomatic solution to end the war, that would have been preferable to bombing civilians; if we could develop a painless topical spray to administer vaccines that was just as effective as needles, we would stop using needles.

And this is why the notion that God could have morally justifiable reasons to permit suffering is invalid. God, if he is omnipotent, would be capable of achieving his end (his 'divine plan' for humanity, as many call it) without allowing suffering.

Alister McGrath argues, "Real life implies suffering. Were God to take suffering away from us, he would take away that precious gift of life itself." This is arguing that suffering is a necessary and intrinsic aspect of life; but if that is the case, then either God is not able to create life without allowing suffering – meaning he is not omnipotent – or he could have, but chose not to – meaning he is not omnibenevolent.

Even if, as McGrath further argues, suffering is a means to a greater end, the dilemma is not escaped. He argues,


So what purpose might suffering serve? There are several echoes of Luther's ideas of the `strange work of God (opus alienum Dei)' - an idea we explored earlier (p. 72) - in Lewis' discussion of the mysterious yet creative role of suffering within the provi­dence of God. Suffering brings home to us the distressing fact of our mortality, too easily ignored. It reminds us of our frailty and hints of the coming of death. `It removes the veil; it plants the flag of truth within the fortress of a rebel soul.' [26] In short, it creates a climate in which our thoughts are gently directed towards God, whom we might otherwise ignore. `God whispers to us in our pleasure, speaks to us in our conscience, but shouts to us in our pains; it is his megaphone to rouse a deaf world.' [27] Painful though Lewis' point may be, there is enough truth in it to make us take it seriously. All must die, and any world-view which cannot cope with death is fatally deficient. Suffering gently prods our consciousness, and forces us to contemplate the unpalatable but real fact of our future death, and how our outlook on life relates to this sobering thought. It can sow the seeds of doubt with existing outlooks, and lay the foundation for a new way of thinking, living and hoping.


The value of the end goal of suffering (speculative as all McGrath's rationalizations are anyway) is irrelevant. If God were omnipotent, he could achieve his ends without suffering. McGrath's arguments fail to address this simple paradox, as do William Lane Craig's. God, if one exists, cannot be omnipotent and omnibenevolent given the reality of suffering in the world. It really is that simple, and no 'sophisticated' theologian has sufficiently addressed it.