- October 16, 2012
I'm finally through True Reason. It was a pretty lengthy project, one that to my knowledge no one else on the atheist corners of the interwebs has undertaken. And, given how terrible the book is, I completely understand why. The reviews for each chapter can be found in the tab at the top of the page. It was, frankly, an exasperating, mostly awful book that displayed an almost offensive lack of understanding of atheist arguments, frequently seemed to count on its readers ignoring the source material for themselves, all the while repeating the most popular and widely-debunked apologetic canards. I don't see how it will be remotely convincing to anyone who isn't already drowning in the Kool-Aid.

But I'm done. I have two major projects in the works. The first, which has already seen two posts (here and here), will be a response to William Lane Craig's frequent (ab)use of the Borde-Guth-Vilenkin theorem, including my forthcoming critique of Craig's review of Vilenkin's book Many Worlds in One (which is fantastic, by the way – the book, I mean, not Craig's thickheaded review of it). I'm sure it will seem kind of technical and inaccessible to some, but I think it's going to get to the heart of some fundamental issues that divide believers from non-believers, so I hope you give it a chance.

The other will be a series called Why Christianity is Bullshit. I thought about giving it a more proper-sounding name, like "Why Christianity is False", but I think, in the spirit of Penn and Teller, that "bullshit" drives the point home a little further. Because Christianity isn't just false. It's also ridiculous, absurd, twisted, and obscene. A series like this just seemed like the natural thing to do after suffering through True Reason.

Thanks for reading. Or perusing. Or maybe just glossing over. I don't know. I especially like it when people comment. So big ups to everyone who offers their thoughts. There's plenty more to come!

Last but not least, here's my cat sleeping in a guitar case. 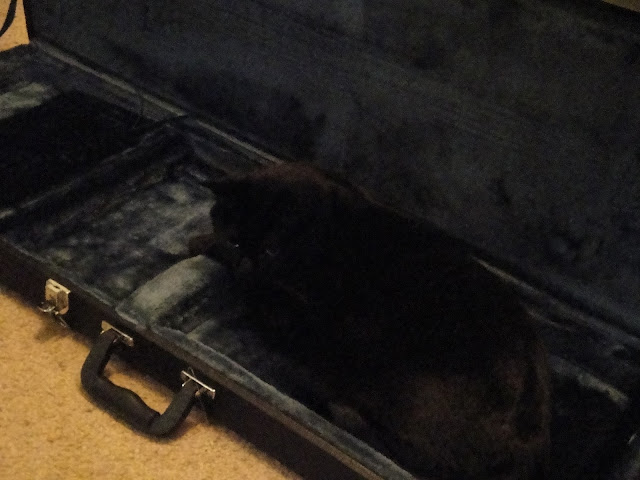