Why Christianity is bullshit, part 3: The theology is absurd

- October 31, 2012
Of all the things that compelled me to reject the Christian faith of my youth, none was more persuasive that the Biblical book of Hebrews. The book of Hebrews essentially explains how Christian theology works; it explains how the new covenant through Christ is related to the previous covenants God had with humanity.

And it's really, really stupid. Here's the short version, in handy bulletin form:
There's more, but I'll stop there. Granted, this is a really short summary, but I'm confident it's generally accurate (although, Christian doctrinal beliefs vary so widely that someone will probably find something to nitpick).

This convoluted narrative is so full of holes that it makes the Matrix trilogy look impeccable by comparison. Christian theology raises some really obvious questions:
Of course, it's still not over! It's still not enough to Fix Everything. No, you see, God will come back, sometime between immediately and the heat death of the universe. All the bad people and atheist bloggers will go to The Bad Place, and all the good Christians will go to The Nice Place. But that raises some interesting conundrums, too:
Being a Christian is like watching really trashy sci-fi – you just have to ignore all the loopholes. The less you ponder them, the more content you'll be. The difference is, nobody will tell you that you're going to hell for not watching enough sci-fi. Well... maybe some people will... 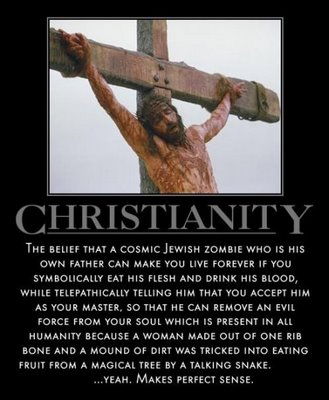