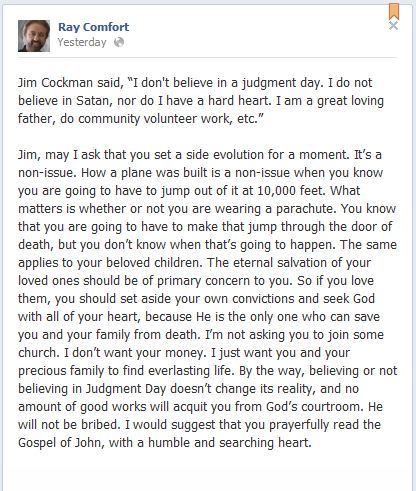 Here's the thing about this sort of gospel preaching style. In order to be swayed by it, you have to already hold a lot of assumptions, all of which are baseless.

Most insidiously though, it plays off our fear of death and annihilation. Of course we don't want to die. But that doesn't mean the alternative is necessarily more appealing.

I've been watching Star Trek: The Original Series on Netflix, and I'm almost through the first season. In an episode I watched last night, called "This Side of Paradise", the crew is infected by spores that grant them perfect health and a blissful state of mind. I thought some of Kirk's lines were quite relevant to how I feel about the whole concept of Heaven:

ELIAS: Captain, why don't you join us?
KIRK: In your own private paradise.
ELIAS: The spores have made it that.
KIRK: Where did they originate?
SPOCK: It's impossible to say. They drifted through space until they finally landed here. You see, they actually thrive on Berthold rays. The plants act as a repository for thousands of microscopic spores until they find a human body to inhabit.
ELIAS: In return, they give you complete health and peace of mind.
KIRK: That's paradise?
ELIAS: We have no need or want, Captain.
SPOCK: It's a true Eden, Jim. There's belonging and love.
KIRK: No wants. No needs. We weren't meant for that. None of us. Man stagnates if he has no ambition, no desire to be more than he is.
ELIAS: We have what we need.
KIRK: Except a challenge.

And later, with a reference to the Fall...

MCCOY: Well, that's the second time man's been thrown out of paradise.
KIRK: No, no, Bones. This time we walked out on our own. Maybe we weren't meant for paradise. Maybe we were meant to fight our way through. Struggle, claw our way up, scratch for every inch of the way. Maybe we can't stroll to the music of the lute. We must march to the sound of drums.

That's the biggest problem with Heaven: the very concept is paradoxical and antithetical to everything that makes us who we are. Paraphrasing Deepak Chopra (sue me) – if we were in Heaven, we would be doomed to eternal senility. You can have your fantasy, Ray Comfort.