It's a new year, baby

- January 04, 2013
Well. So, over the holidays things around here were fairly slow. I had a fantastic holiday (the parents love the girlfriend!), and I'm very refreshed and eager to dig into the blog.

I've made a great deal of progress through Alexander Vilenkin's book Many Worlds in One, so soon I'll be able to finish that multi-part series I started several months ago: How William Lane Craig Misrepresents Alexander Vilenkin. Craig cites Vilenkin's work often, to support the notion that the universe had a beginning (ergo Jesus). Reading the book myself, I find Craig's representation to be so woefully misguided and flagrantly distorted that it borders on outright lying. But then again, this is coming from a guy who literally thinks that Einstein is wrong about General Relativity.

Anyway, yes, more to come on that and much more. Until then, here's something spied on Facebook today: 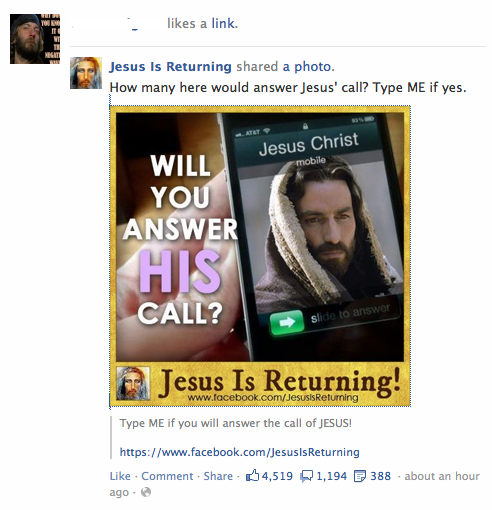 I think it's kind of hilarious that apocalyptic Christians imagine the returning Christ as looking the exact same as he did 2,000 years ago (except, as the pic above indicates, much less Jew-y). Y'know... sandals, robes, a beard, etc. Hello... he's supposed to be God. He can come back as a 100-story Batman, or as a man made of bees, or as a 20-something wearing True Religion jeans (what else) and a popped-collar shirt with a sideways Ed Hardy hat. Seriously, why would God come back wearing old, nasty looking robes and have a dirty beard? Well, maybe it'll be a soul patch (zing!)...