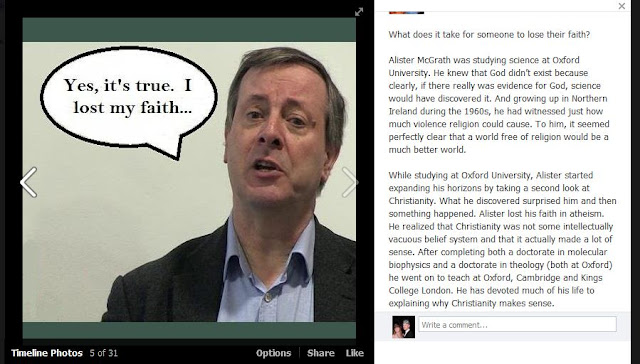 It's an ad for a page that promotes Christian apologetics.

I've heard several prominent Christians claim they were atheists – McGrath, Lee Strobel, and Ravi Zacharias to name a few off the top of my head. In every case, they seem to characterize atheism as an ideology unto itself – one which can only lead to hopelessness and despair.

But here's the thing – atheism is a lack of belief in gods. That's it! Atheism is not a philosophical framework; rather, atheism is the outcome of a rational, evidence-based view of the world. It is not the belief that gods cannot exist, or that the existence of gods can be conclusively disproved. It's simply the belief that there is insufficient evidence to warrant belief in gods.

That's why statements like McGrath's – that he lost his "faith in atheism" don't make any sense. It's like saying you lost your faith in the non-existence Cthulhu. If there's any philosophical framework at work that underpins atheism, it's evidentialism, about which there are these two very excellent videos on Youtube: