What's so great about forgiveness?

- January 18, 2013
During my spell as an evangelical Christian, there was a great deal of emphasis placed upon the value and importance of forgiveness. It went hand in hand with "love your enemies" and "turn the other cheek" (y'know... the stuff Christians say they do, but don't) – it was an idea of humbling oneself by letting go of bitterness and anger, and following God's example. Of course, I don't remember threatening anyone with horrible eternal torture if they didn't accept my forgiveness, but that's a topic for another day. But in any case, it's right there in the Lord's Prayer: forgive us of our trespasses, as we forgive those who have trespassed against us.

This phenomenon isn't restricted to the church; there's a great deal of pressure in popular culture to "forgive". Families of murdered children "forgive" the killer. Husbands and wives whose marriages were destroyed by infidelity "forgive" their estranged spouses. We're supposed to believe that forgiving those who have hurt us is the right, healthy thing to do. But is it?

Of course, I think it goes without saying that it's probably unhealthy to spend your life harboring grudges. People will hurt you. They'll lie, cheat, manipulate, and abuse you – sometimes in small ways, sometimes in ways that will take years of recovery. In researching for this post, I found scant literature on the psychological benefits (if any) of forgiveness. One study I did find was titled, Granting Forgiveness or Harboring Grudges: Implications for Emotion, Physiology, and Health. It says some vaguely good things about forgiveness, but what immediately popped into my mind is that these aren't the only two options. We can also let go. 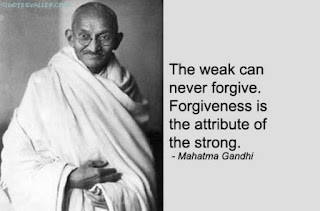 Maybe that's just arguing semantics, but I think part of the problem is that the concept of forgiveness is often vaguely and broadly defined. What does it mean for the family of the murdered child to "forgive" the killer, then watch him receive a lethal injection? It's interesting in light of the version of the Lord's Prayer often heard in Protestant churches: forgive us of our debts, as we forgive our debtors. Well, when you forgive a debt, that means it doesn't have to be paid. That's the whole point. So the idea of forgiving someone for something they've done to you or a loved one but then continuing with their punishment all the same seems to make forgiveness little more than feel-good gobbledygook.

I recall one of my more painful breakups, from a few years back. She dumped me totally out of the blue, for someone else. And it was with a text message. Just days before I'd been telling a friend how lucky I was, how madly in love I was, etc. etc. Then the other shoe dropped. I was devastated. For the first time in my life, I knew what it was like to cry for days. I couldn't sleep or eat, and eventually had to take a day off work just to get some rest.

Do I forgive her? Fuck no I don't forgive her. She said some time later (and also via text) that she was sorry. Well, okay. That doesn't change anything. What she did was cowardly and cold – the least she could have done is to talk to me face to face. But even though I haven't forgiven her, and probably never will, I've let go. I realized that there were lots of positives gained from the relationship itself as well as the fallout, so I focused on those things. I spent time with friends and family, and eased back into the dating life. Now, I'm in a wonderful relationship with a truly exceptional woman. I'm not holding a grudge over the past, but I haven't forgiven either; I've just taken what positives I could from the experience and moved on.

Part of what I gained from that experience was how to deal with that kind of pain. Because at first, I told myself I wasn't angry with her, that I forgave her, etc. I realized though that I was only kidding myself. Of course I was angry! I had every reason and right to be. And what would it even mean to "forgive" her? She hadn't asked for forgiveness, or even understanding. What good would it do me to view her as if she was somehow worthy of something that, in my estimation, she had not earned? I caused more distress for myself by trying to wash away my true feelings. Accepting that I was angry and acknowledging that she hadn't earned my forgiveness was liberating and pivotal in my healing process.

That's just a personal example, and I know many others have fared far worse than I. I haven't been through anything so severe as a spouse cheating, someone stealing valued possessions, someone I care about being abused or assaulted or killed, or anything of that nature. But I suspect the issue is the same – forgiveness is overrated. It's become such a ubiquitous part of our vocabulary that in most circumstances it's been watered down to meaningless nothingness anyway. We don't have anything to gain through unearned and meaningless forgiveness. We can accept our pain and feel justified in our anger. We can let those feelings run their course, grow as best we can from our hardships, and then get on with the rest of our lives.