Jesus is his own dad

- February 17, 2013
One of the more peculiar and absurd theological quirks of Christianity is that Jesus is "fully God and fully man", as is often said. He's not a distinct person from God – he is God. That's all well and good until you apply a modicum of logic to it for two seconds.

God supernaturally impregnates Mary, so Jesus is his own father.

Jesus prays to God. That means he prays to himself. He knew what he wanted to ask himself before he prayed, then granted (or not) his own request.

Jesus offers himself to God on our behalf as a sacrifice of atonement – so God is sacrificing himself to himself.

He ascends to Heaven and sits at the right hand of God, meaning that he is literally beside himself.


I could go on, but you get the gist. What's funny is that there's really no way at all for Christians to make any logical sense of this. It's a clear violation of the law of non-contradiction, and it's nonsensical – if Jesus is an autonomous person with unique desires, thoughts and experiences that God does not also have, then he logically is not God. 1 + 1 + 1 (can't forget the Holy Spirit) will always equal 3, not 1.

I've posed this question to Christians on countless occasions, and I've never received anything remotely resembling a straight answer. I suppose the best a Christian might manage would be to argue that the rules of logic don't apply to God – he can bend or break them as he wills. Except if that's true, then you can throw all Christian apologetics out the window simply on the basis that if God can arbitrarily defy the rules of logic, then there's no sense in using the rules of logic to infer anything about him at all – including his mere existence.

But that's religion for you, and it's something I realized long ago that fueled my deconversion: believers will take logic as far as they can, but when they hit the inevitable impasse they simply declare, "But God can do anything!" It's exactly like doing this: 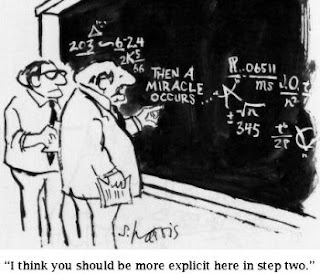 Which by the way, in case you've seen that cartoon before and wondered who the artist is, it's Sidney Harris. 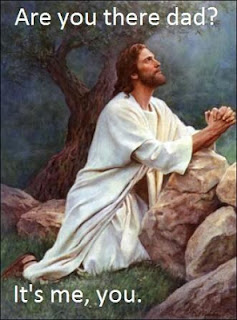