What's so advanced about Pantheism? 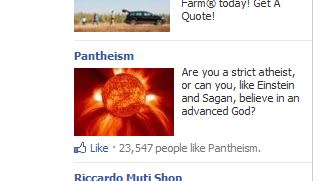 
Pantheism is the belief that everything composes an all-encompassing, immanent God, or that the universe (or nature) is identical with divinity. Pantheists thus do not believe in a personal or anthropomorphic god.

Deepak Chopra is a pantheist, and he's frequently yammering about the patriarchal god of Western monotheism being a narrow and primitive understanding of God:

I believe that spirituality can take hints from modern science to actually support the existence of God. Some of these hints have emerged from quantum physics, which long ago showed that the seemingly solid, convincing world of matter and energy actually derives from a highly uncertain, invisible realm that existed before time and space. Is this the domain of God? If so, it can't be the God of Genesis, a human-like figure sitting above the clouds who created heaven and earth in seven days. I think a new and expanded spirituality can deliver a God that is the same as pure intelligence, creativity and consciousness.[2]

I'm gonna ignore Chopra's absurd abuse of quantum mechanics for the moment. Once you've realized that a Creator is fraught with logical paradoxes and is not supported by science, pantheism might seem like an appealing alternative. And hey, Einstein was some sort of pantheist, and he was smart! Ergo, being a pantheist is smart. I can logic!

First, it's worth noting that there's nothing particularly new about pantheism. From Wikipedia:


Although the term "pantheism" did not exist before the 17th century, various pre-Christian religions and philosophies can be regarded as pantheistic. They include some of the Presocratics, such as Heraclitus and Anaximander.[15] The Stoics were pantheists, beginning with Zeno of Citium and culminating in the emperor-philosopher Marcus Aurelius. During the pre-Christian Roman Empire, Stoicism was one of the three dominant schools of philosophy, along with Epicureanism and Neoplatonism.[16][17] The early Taoism of Lao Zi and Zhuangzi is also sometimes considered pantheistic.[14]

But the bigger issue to me is this: if you're just going to make God synonymous with the laws of the universe, the vacuum energy, the 1-dimensional vibrating strings of string theory, whatever – then what has been added to our understanding of the universe? "God is infinite love". What the hell does that even mean? Our understanding of the natural world is in no way demonstrably enhanced by altering the definition of these terms to deify them.

Pantheists will always be able to say that their version of God is compatible with science, simply because the pantheistic God literally is everything. But as the old chestnut of scientific wisdom goes, a theory that can explain everything cannot explain anything.