Camp Quest kicked out of fundraiser for being non-religious

- April 08, 2013
Camp Quest is a non-religious kids camp here in Oklahoma whose mission statement is (in part) "to provide children of freethinking parents a residential summer camp dedicated to improving the human condition through rational inquiry, critical and creative thinking, scientific method, self-respect, ethics, competency, democracy, free speech, and the separation of religion and government."

Horrible things, those! It's not an atheist organization per se, but one dedicated to "freethinkers"; it'd probably be better described as a group for the people who, when filling out religious surveys, circle "none of the above".

But today they were booted out of a fundraiser at local barbeque restaurant because the owner didn't like that they were a bunch of evil atheists. 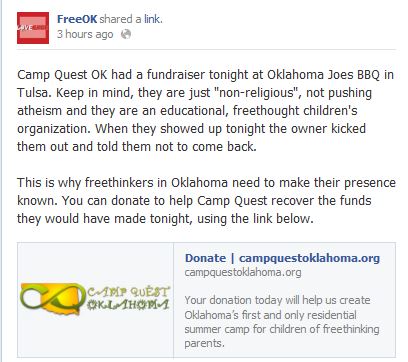 Now of course, this is a private business and the owner has every right to kick out whomever s/he wants. But my goodness... what are people so afraid of? It's quite telling that the religious response to critical inquiry, skepticism and reason is often fear and antagonism.