The ontological argument, dualism, and the nature of mathematics (in one post!)

- May 26, 2013
That's right – this one post is gonna have all that stuff. I've probably bitten off more than I can chew, but I think it's all connected and I want to explain why.

One of the biggest semantic puzzles in philosophy seems to be the nature of existence. For example, does the number 1 exist? In what way? Does it exist as a material object? Are our thoughts non-material objects, and for that matter what the hell is a non-material object? Philosophers have been entertaining themselves for centuries with this kind of stuff.

It has implications for lots of subjects. In my ongoing chats with Randal Rauser, we've touched on the old ontological argument for God's existence. The ontological argument, though there are several different versions, essentially relies on the notion that "existence" is a possible property of a concept. If we can conceive of something (we'll call it x), then it's (presumably) greater for x to possess the property of existence than the property of non-existence. So if God is by definition a "maximally great" being, then by definition God has to exist.

To explain why that's complete and total nonsense, I'll talk about math.

In the book Where Mathematics Come From, Lakoff and Nunez propose a way of thinking about math that takes into account our modern understanding of cognitive science, which the great philosophers of antiquity obviously knew nothing about. They call it the "embodied mind theory of mathematics".

Here's the gist of it: let's say we have a handful of drinking glasses, like this: 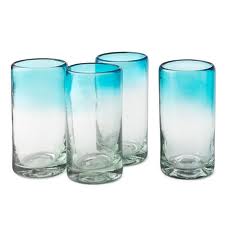 This is what Ernst Zermelo and Abraham Fraenkel call a "set", forming the basis of Zermelo-Fraenkel Set Theory – widely considered to be the foundation of modern mathematics. According to the embodied mind theory, the number 4 is a cognitive abstraction – that is, an abstract representation of this particular set of objects. The number 4 isn't actually an "object" at all. It doesn't exist independently of the human mind. Rather, the human mind creates the number 4 as a representation of an observed set of objects.

I'm going to spare expounding on the complete detail of this theory of mathematics – you'll just have to read the book for yourself – suffice to say I think this is a logical way to think about mathematics that fully takes into account our best understanding of cognitive science. I find mathematical realism (the predominant view), which would say that the number 4 is an object that exists independently of the brain, to be nonsensical in light of that modern scientific knowledge.

The Platonic form of realism says that the number 4 exists as an "abstract object", which brings me to dualism – the belief that the mind exists separately from the brain, as opposed the materialistic monist view which says that the mind is the product of the brain. For the record, if you want to understand my views on dualism, there's a phenomenal video here (it's two parts, totaling about 20 minutes) that concisely and thoroughly demonstrates the incoherency of dualism. For this post, I just want to pull some talking points from that video about the concept of abstract objects, and the idea that there can be such a thing as "non-physical objects".

There are a couple of problems with the concept of non-physical objects. Firstly, it simply does not follow that just because we cannot describe an abstraction the way we describe a material object that it exists as a non-material object – rather than, as in the case of consciousness, a representational process. Secondly, the very term "non-physical substance" is loaded; if it actually lacks any physical properties at all, then the dualist has a tough task ahead to explain what it is and how, specifically, it interacts with physical matter (like our brains). Lisa Randall had some great comments to this effect in her book Knocking on Heaven's Door (emphasis mine):


"Clearly people who want to believe that God can intervene to help them or alter the world at some point have to invoke nonscientific thinking. Even if science doesn't necessarily tell us why things happen, we do know how things move and interact. If God has no physical influence, things won't move. Even our thoughts, which ultimately rely on electrical signals moving in our brains, won't be affected."

"If such external influences are intrinsic to religion, then logic and scientific thought dictate that there must be a mechanism by which this influence is transmitted. A religious or spiritual belief that involves an invisible undetectable force that nonetheless influences human actions and behavior or that of the world itself produces a situation in which a believer has no choice but to have faith and abandon logic--or simply not care."

Randall is specifically talking about God here, but I think her comments apply equally well to the idea of a non-physical consciousness. What properties of this non-physical substance allow it to interact with and influence physical forces? How does it work? Dualists paint themselves into a corner by proposing a concept that from the outset defies empirical investigation – problematic for something that is supposed to explain empirical facts about the world.


Abstractions and the ontological argument

Fortunately, there's a much simpler way to think about abstractions, which – like the embodied mind theory of mathematics – comports with cognitive science. They're not "objects" at all, but representations. A digital photograph of a lake, for example, doesn't possess any of the properties of the lake and, if broken down will be revealed to be a collection of data compiled in electronic circuitry. Perhaps not a perfect analogy (since a photograph is visual rather than conceptual), but it's not a lake or anything like a lake; it's an arrangement of data which forms a representation of the lake.

This has important implications for the ontological argument. The argument begins by introducing the concept of a "maximally conceivable being". This raises an obvious question: conceivable to who, or what? Clearly, the question implies conceivable to the human mind. This means that, like the number 4, this concept is a cognitive abstraction that exists in the human mind as a representation – in this case, as a representation of some possible thing (since unlike the set of glasses, God has not been empirically observed). It doesn't exist independently of the human mind as some "non-physical object". And here's the really important part: given that it does not actually exist independently of the mind, any "properties" this conceptual being has are themselves conceptual abstractions – not "non-physical objects".

This all comes back to Immanuel Kant's objection to the ontological argument: objective existence (or more colloquially, actual rather than conceptual) is not a property of something. Rather, you have to objectively exist in order to have objective properties in the first place. If something doesn't exist as an object but rather as a conceptual abstraction, its properties are also abstractions. Religious philosophers who use the ontological argument are counting on a great deal of semantic obscurity around the major concepts like "existence" and "properties" to slip the argument past credulous listeners. Theologians have to redefine the key terms into absurdity rather than comporting with scientific knowledge to make the argument work, and that's as clear indication as any that the ontological argument is a really, really bad one.


Hopefully the dots are connected between those disparate subjects. If I was all over the place, well, I haven't quit my day job!