Tim Lambesis of As I Lay Dying... the ultimate "backsliding" Christian?

- May 19, 2013
If, like me, you grew up in the youth group culture of the 1990s, you've probably heard the term "backsliding" to denote those who fell back into the worldly ways of sex, drugs and rock 'n' roll. Y'know, because you're either a pious, chaste Christian or a self-loathing angry hedonist – no middle ground! 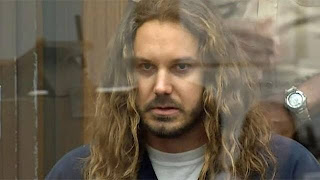 Anyway, if you haven't caught the story in the news yet, here it is: Tim Lambesis is the singer for the mediocre metalcore band As I Lay Dying and the vastly more awesome Austrian Death Machine. He's now facing serious charges after allegedly meeting with an undercover cop who was posing as a hitman, whose services he (Lambesis) solicited to have his estranged wife killed.

According to the prosecution, Lambesis met the officer (whom he knew only as "Red") and gave him his wife's name, the security codes to her house, told the 'hitman' a time to do the deed (when he had the kids, so he'd have an alibi), and when asked if he wanted her killed replied "yes".

The initial defense is that it was a setup. It's hard to believe, even if it was a setup, that he'd be so easily duped into saying he wanted his wife killed and giving this stranger the security codes to her house. And now, in a move that really smacks of desperation, the defense is trying to blame steroids. It's incredibly stupid because not only is there scant solid evidence that so-called "roid rage" even exists, but even if it did it would lead to impulsive behavior – not a clandestine meeting with a hitman.

It's all interesting because Lambesis, along with his bandmates in As I Lay Dying, has always been an outspoken devout Christian. The band itself isn't what you'd call "Christian rock" in that unlike say DC Talk or Jars of Clay, ministry isn't really the point of their music – they're just Christians in a band, not a "Christian band". As part of the most recent defense, Lambesis' lawyer said that he "lost God".


According to NBCSanDiego.com, the lawyer added, “It has been a terrible tragedy. He was a very caring, gentle man [before taking steroids] and we need to get him back.” Lambesis reportedly ballooned in size from 170 pounds to 220 pounds and in his lawyer’s words “was not the same person. He was irritable and lost God.”

I want to be clear here – Lambesis is both innocent until proven guilty and solely responsible for his actions. He is not representative of any other believers. Still, I have to sort of chuckle at the pathetic plea for sympathy from his lawyer on account of him having supposedly "lost God".  It doesn't matter what he believes about God, and I personally couldn't care less whether he has "Jesus in his heart" or not.

This is all just an anecdotal example of something I've harped on a lot in the past – Christians don't live better lives than non-believers. They're not happier, they're not less likely to be criminals, they're actually more likely to get divorced than non-believers, they're not less likely to suffer from depression or other mental illnesses, etc. etc. One of the big "sells" of Christianity is that your life sucks. You're being seduced by "the world" or "the flesh" and you won't be truly happy until you have Jesus. The reality is that believing in God doesn't make a lick of difference, and Christians are every bit as screwed up as the rest of us.