- May 28, 2013
So recently, as you have no doubt heard, here in my home state of Oklahoma there was a massive tornado that leveled a good chunk of the town of Moore. The dead are estimated at 24. Lots of people are homeless. There has been a huge outpouring of support from all over the nation, right down to the usual Facebook "support" with lots of "thoughts and prayers" and out-of-state friends replacing their avatar with a picture of the state with the word "home" in the middle. The President pledged aid.

And yet, I've felt mostly detached from it all, and I wasn't totally sure why until I talked with a client of mine tonight, who works as a nurse. She's around death all the time. She told me that she cried the first time a patient died, but that now she just goes on with her day – so much so that she feels bad for not feeling bad. Families grieve, and she steps into the hallway and converses normally with co-workers. She shrugs her shoulders, "People die."

I think that's because she's around death all the time. In our culture, we try to keep it out of our conscious. We avoid talking about it. Doctors give exaggerated prognoses for terminally ill patients to spare they and their families the hardship of facing death. We avoid death so intently that a lot of people have to be talked into writing a will, which is a pretty important thing to do since you're gonna die no matter what. 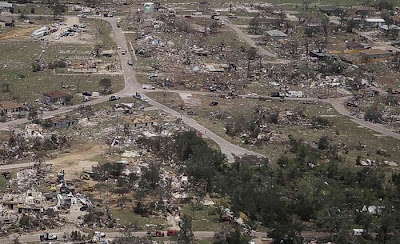 When the tornado hit Moore, I wasn't really that upset. Don't get me wrong – I sympathize with those who have lost homes, limbs, pets, or loved ones. It's tragic and I'm sure it's extraordinarily hard for them. But natural disasters happen all the time. Tsunamis, earthquakes, hurricanes, floods, tornadoes, blizzards... shit happens. And a lot of times, people die. A heat wave hits, and a dozen people die of heat stroke. A tsunami hits and homes are destroyed and people drown. An earthquake levels homes and crushes people – or devastates an entire nation (remember Haiti?). It's just the way it is. 24 were killed in Moore. Well, fun fact: there are 7 billion people on this planet. 24 people doesn't even qualify as a drop in the bucket. Disasters happen. People die.

I don't know if that makes me cold, or what. Generally, I view myself as a very empathetic person. If I were to lose loved ones, pets, or my home in such a way, I know it would be horrible. It's not that I don't feel for them. It's just that in the big picture, the occasional tragedy is just the card our indifferent planet deals us. I see it in the news, and I say to myself, "Man, that's awful". I send a small donation to the Red Cross, and I get on with my life.