When disaster hits, don't be a dick

- May 21, 2013
Maybe it's because I have lots of atheist friends on Facebook, or maybe it really is becoming more prevalent; either way, I'm seeing lots of snarky comments in the aftermath of the devastation in Moore, OK about how stupid and pointless it is to offer prayers in the aftermath of a natural disaster.

While I don't personally know anyone who was hurt, killed, or had their home destroyed (Tulsa is a good ways from Moore), I'm only a couple degrees of separation from those who have. And yes, lots of people are talking about "sending prayers". 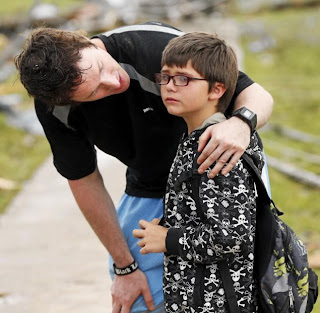 Yeah yeah, I'm an atheist and I think praying is stupid. Like George Carlin said – what's the point of praying if God's just going to do his will anyway? And what good is a Divine Plan if every asshole with a two-dollar prayer book can come along and screw it all up? You gotta love the selective believer logic which says that God isn't at fault for not stopping a massive tornado from wreaking havoc, but it was totally God who stopped a beam from falling on the family dog or some little kid who barely made it out alive.

To my knowledge, no one is saying something like, "Hey, don't send money – just pray! What people really need are lots of prayers!" What I've seen instead is an outpouring of empathy and condolences. For believers, saying something like "You are in my prayers" is simply a way of expressing those feelings. It's not a call to stop volunteer aid and/or donations in lieu of divine magic.

So in the aftermath of all this, don't be a dick. When someone religious uses the word prayer in an expression of empathy, fucking let it go. Don't use it as a springboard to mock people for their belief. There's a time and a place for mockery, but this ain't it.


p.s. – Props to my buddy Mike (pictured) who is at ground zero helping those in need after the school at which he works was leveled.

p.p.s. – If you're looking for a non-religious charity, the Foundation Beyond Belief has one here:
http://foundationbeyondbelief.org/crisis