Worse than Hitler? Or, McDonald's has oatmeal 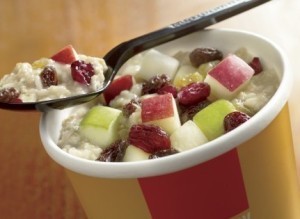 I was reading an article over on Huffpo linked from Facebook with the header, "McDonald's Admits Truth About Salads". I figured this would have something to do with the sourcing of the ingredients or whatever, but the actual article was called "McDonald's Admits Salads Only Make Up 2 to 3 Percent of Sales". That confession sounds like it says more about their customers than the company.

Attached to the article was a little slideshow called "11 Things McDonald's Wishes You'd Forget". It sounds like it'd be damning stuff, but instead it's stuff like, "Its employees work on Christmas" (since apparently no other restaurants are open on Christmas), and "They've been accused of..." without actually saying whether that accusation went anywhere.

One of them was "Its oatmeal isn't good for you", and it linked to an old op ed (from 2011) by some guy named Mark Bittman writing for the New York Times, entitled "How to Make Oatmeal... Wrong." And it's this, ladies and gentleman, that grinds my gears.

The article seems like the kind of thing that health-conscious people ought to cheer for. He says,


Since we know there are barely any rules governing promotion of foods, one might wonder how this compares to real oatmeal, besides being 10 times as expensive. Some will say that it tastes better, but that’s because they’re addicted to sickly sweet foods, which is what this bowlful of wholesome is.

Sounds pretty bad. So, what's so horrible about McDonald's oatmeal?

Huh. That's weird. According to McDonald's website, the fully-loaded oatmeal – oats, light cream, brown sugar, dried apples, dried cranberries, and dried raisins – has 290 calories. I'm not sure when that became a lot of calories, because, well, it's not.

What about the sugar though? Well, it turns out that most of the sugar comes from the cranberries. Cranberries, being extremely tart, have to be sweetened to be edible for most not-weird people. Virtually all dried cranberries are sweetened. They're also packed with antioxidants. But if the sugar is bothersome, McDonald's allows you to leave it out. That drops the calories to 220 and the sugar 17 grams instead of 32. Ask them to leave out the brown sugar as wel
l, and you're down to 200 calories and just 3 grams of sugar.

Bittman then really sticks it to McDonald's:


I asked them this, via e-mail: “Why could you not make oatmeal with nothing more than real oats and plain water, and offer customers a sweetener or two (honey, the only food on earth that doesn’t spoil, would seem a natural fit for this purpose), a packet of mixed dried fruit, and half-and-half or — even better — skim milk?”

If you made your own oatmeal and put brown sugar and/or honey, a bit of mixed dried fruit and a little bit of half and half, you'd have... pretty much the exact same thing as McDonald's oatmeal. Look: oatmeal is cheap and easy to make at home. Bittman can't seem to imagine why anyone would go to McDonald's and pay a premium for oatmeal that you can make fast, cheap and sans a few harmless additives in a few minutes in your own kitchen. Truth be told, I can't either. I eat oatmeal all the time. It's literally a minute or two in the microwave, another minute or so to cool, and it's breakfast time. Hell, throw it in some tupperware and you've got breakfast to go.

But at the same time, the McDonald's scapegoating is getting old. Their oatmeal can be made into a pretty healthy breakfast, and even fully loaded it's not remotely as horrible at Bittman's making it out to be. It goes without saying (or it should) that for a whole-grain, high-protein, healthy-fats, low-salt, minimally processed breakfast you are better off staying away from fast food joints entirely. But if you're out of town, on the go, or whatever and you don't have the luxury of being able to cook your own breakfast from scratch, you can have a reasonably healthy breakfast at McDonald's.