I wish my grandmother could die

- July 09, 2013
My grandmother, now 91 years, is one of the sweetest, smartest, most compassionate human beings I've ever known. As a child she was not just some distant relative but a great source of support and love. To my cousin, who now helps take care of her, she's like a second mother.

For the last several years, her health has been deteriorating. Following a hip replacement, she never followed through with the rehabilitation like she should have, which is all too common. Accordingly, she gradually became less mobile, which led to her being weaker, which led to her being more dependent. It's a downward spiral and, at that age, there's little if anything to stop it. 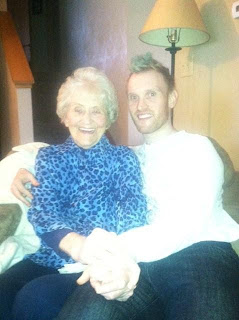 She's recently been diagnosed with a blood clot in her lungs. She's also been found to have blood in her urine and stool. And she has a mass which may or may not be cancerous. She doesn't want to do more tests. She sleeps for 16 hours a day. She requires a bedside commode and has fallen several times. She needs not only a walker to move about, but a helping hand (or two). She fatigues very quickly and cannot remain upright for very long. More recently she's had increasing cognitive difficulties, such that conversations with her can be difficult.

She's also depressed. She's confided in my aunt that she doesn't understand "why the Lord hasn't taken me yet". She feels like a burden to those around her. Tonight I was told that she's been lying in her bed crying. Despite her depression, she hopes to live long enough to see her daughter, granddaughter (my aunt and cousin) and her great-grandchildren in about ten days. I hope for her own happiness that she lives that long. I hope it's a beautiful and happy day, and that she suffers little until then. And I hope that soon after, she can go in peace.

There's a certain point when you're not really living. You're just surviving day to day, feeling like a burden to others and unable to help yourself. You can't stand or walk without assistance, and you even need help going to the bathroom. Meanwhile, medical tests and treatments rack up expenses for your loved ones.  I'm a believe of assisted suicide. I feel very strongly that we should have the right to choose to die with dignity, to stop prolonging suffering that realistically can only become worse as the inevitable end draws closer.

I love my grandmother very much. And it's because I love her that I hate to see her depressed, feeble, and suffering in her final days. I wish she could have the choice to die peacefully, painlessly, and with dignity. But I know that, in our death-fearing culture, she will not have that choice. Instead, measures will be taken to prolong her life as much as possible. She will grow more feeble, more dependent, more confused, more depressed until her body gives out. She has precious few moments, like the time with her children and grandchildren, that brighten her days. She's lived a long, happy life and raised a wonderful family that has paid her love forward, since it's far too immeasurable to ever give back. And now, while she lies in bed in tears, I find myself wishing she could say goodbye – on her terms.