The eight miracles of Buddha

- July 16, 2013
When I was in Pasadena this past weekend, I visited the Norton-Simon museum which features a terrific exhibit on Asian art. Among the many statues are descriptions of Hinduism, Buddhism and Jainism. It's been many years since I studied those religions (doing so was paramount in my deconversion from Christianity), but I was particularly fascinated by a statue depicting the "eight miracles" of the Buddha: 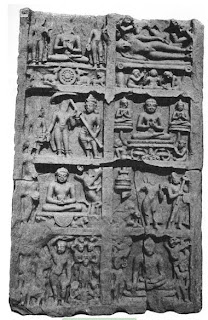 It's fascinating because of how familiar it all sounds as an ex-Christian. Buddha was claimed to have been immaculately conceived, to have tamed a wild elephant instantly, miraculously purified water, ascended to Nirvana (and then came back), walked on water, and done a litany of other supernatural things.

Studying world religions is a fantastic way to deconvert, because it removes you from your own ethnocentric biases. You begin to see that those "miracles" that Jesus supposedly performed weren't actually all that unheard of in antiquity, and that similar tales abound in religions all over the world – many of which predate Christianity by hundreds or even thousands of years. Then you ask yourself why you should think the miracles described in the Bible are True Facts, but all those countless other miracles are just cultural myths, especially when the ones in the Bible are remarkable only in their lack of originality.