- September 02, 2013
I spied this on Facebook today. I'll let you suffer through it before sharing my thoughts: 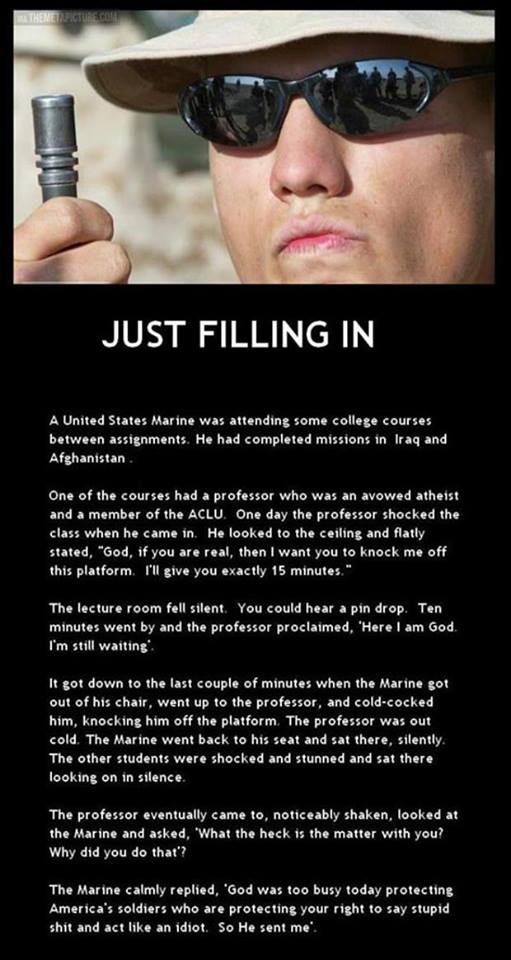 Firstly, this whole story is quite obviously bullshit, in that it never actually happened. It's the kind of things that wingnut evangelical Christians make up to make them feel better, like the old story you can find on Chick Tracts about the student who one-ups his ignorant biology professor. Variations of the tale have been circulating for several years, but there's no connection to any news event. In real life, the "Marine" would have been charged with assault and possibly dishonorably discharged – as last I checked, the Marines frown up assaulting civilians.

Austin Cline at atheism.about.com had a good critique of this tripe:


This is nationalistic American Christianity. Notice that the violence is perpetuated by a member of the American military — ostensibly tasked with defending America, but here tasked by God with defending the True Faith. For the Christian Right, America and Christianity tend to be identical. This is also anti-atheist bigotry. A parallel story of violence towards a Jew or an Asian would be quickly condemned, but it's OK to post "humorous" tales of violence towards atheists because... well, because atheists just don't matter. They are unworthy of the same consideration and decency Christians have had to learn to show towards others.


That's not what ran through my mind when I read it, though. I immediately thought of how stupid it is to think that God is "protecting America's soldiers". Really? Tell that to the families whose sons and daughters have come home in coffins. Or without limbs. Or without faces. If God is protecting soldiers, he's doing it pretty selectively, which raises a salient theological conundrum: how does one distinguish between a selectively protective God and a non-existent one?

This kind of story does several things. One, it exposes how stupid right-wing Christian theology really is. Two, it denigrates non-believers as unworthy of fair treatment and respect while ignoring the fact that there are, in fact, lots of atheists in foxholes. Three, it insults Christians by depicting them as nationalistic brutes. And four, it reveals how shitty some Christians actually are: 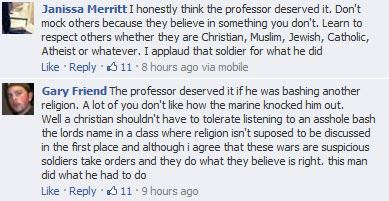