NDT on the science of "Gravity"

- October 07, 2013
I haven't seen Gravity yet. I've heard it's pretty awesome; a friend described seeing it in IMax 3-D as "an hour and a half on the edge of my seat". It holds a ridiculously impressive 97% rating on Rotten Tomatoes and did big business over the weekend.

The film sort of presents itself as a slightly more plausible take on a sci-fi thriller, but the brilliant buzzkill Neil deGrasse Tyson is on hand to tell us how wrong the movie gets... well, just about everything: 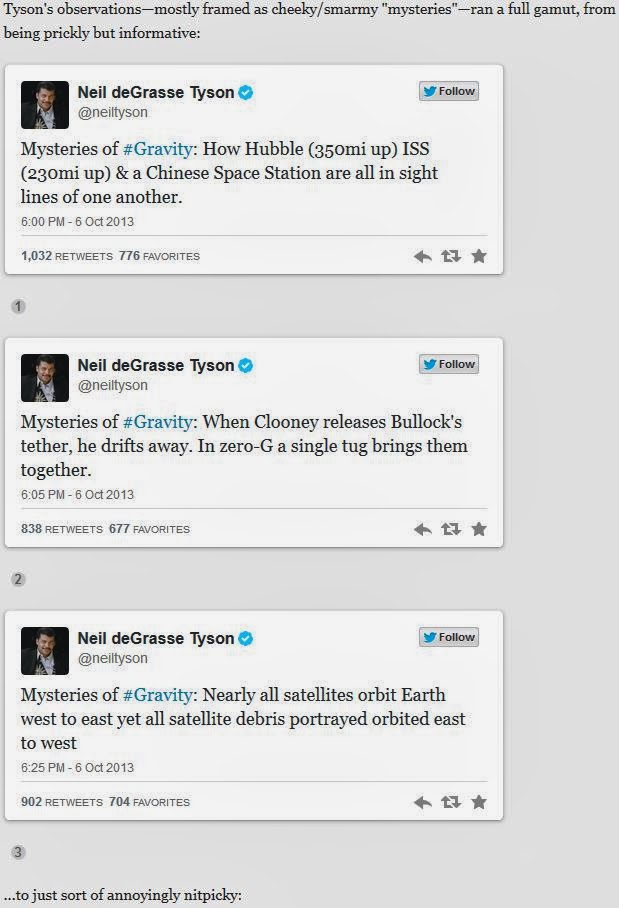 I wonder how sci-fi nerds will take this. Some people, for example, really hated Ridley Scott's Alien prequel-ish film Prometheus because it gets a lot of science really wrong. (For the record, I concurred wholly with Roger Ebert's review.) But here's a supposedly more 'realistic' (at least by appearances – no warp drives, aliens, etc.) sci-fi film and it turns out it fails the science test pretty hard as well.

What ever are we to do? I dunno... maybe accept the fact that sci-fi films make concessions for storytelling and for the general ignorance of the movie-going populace and just enjoy the ride? Nah, there's some weird sense of pride that nerds get from being total buzzkills.