The Swedish Atheist, The Scuba Diver and Other Apologetic Rabbit Trails – I'm reading it

- October 30, 2013
After my last foray into one of Randal Rauser's books, I wasn't about to drop coin on another one. Hell, I'm still disappointed that Randal ultimately chose to hone in one rather trite statement rather than actually discuss the central criticisms I published in my partial review. 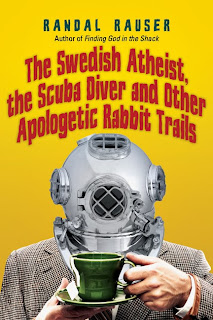 And yet even if he wasn't interested in conversing with yours truly, conversation seems to be something that Randal at least likes the idea of, because this longly (yes, I made up a word) titled book is about a Christian and an atheist talking casually about profound things over a cup of Joe.

In any case, the book is free on Amazon today. And since I'm an atheist which of course means I believe in nothing, it seems like an opportune time to "buy" it and give it a read. My review of Randal's other verbosely-titled book What on Earth Do We Know about Heaven? wasn't a true review; I was just after a handful of specific questions I'd asked Randal about on his blog, at which point he said he answered those questions in the book. Turns out that wasn't the case, leading me to conclude it was just a trick to get my $9, and I'm sure Randal is now busy diving in his giant vault of money in a totally unnecessary scuba suit.

SPEAKING OF SCUBA SUITS (capitalized because you know you're impressed by that segue), I've only cut through the introduction tonight but I intend this – unlike my review of WoEDWKaH (even the acronym is fucking long!) – to be a full-on review of the book. The introduction admirably starts off with an admonition of the adversarial nature of many debates, to which I could not help but think Uh, Randal, have you met yourself?

I once thought the perfect setting for an apologetic exchange was the lecture hall, where two individuals engaged in a knockdown, drag-out debate in front of a rapt audience. But that reeks of combat. Let's get rid of the polarized audience and constricting debate resolution-and definitely throw out the timer!

Some conversations are meant to be savored as part of what I call the "grande conversation." Grande conversation takes hours or even weeks-however long the people talking want to spend-and participants pursue a rigorous, trusting, honest sharing of ideas in a comfortable, noncombative environment.

I could not agree more. I think lecture hall debates are masturbatory time vacuums in which the two interlocutors spend 2½ hours talking past each other and trying to impress their own audience. If many minds have been or are being changed by such charades, I haven't heard anything about it. Like, ever.

Anyballs, I'll be... uh... diving into Randal's book this week. But I also have a new guitar arriving on Friday, so let's hope I can get the book read and the review written before then because God Almighty I probably won't leave my studio for a week, much to the chagrin of my lovely and patient girlfriend.

And speaking of my girlfriend, did I mention we're engaged? Wedding in a year. Extent of pagan ritual integration is yet to be determined, but goat sacrifice and the exchanging of ancestral swords have not been ruled out.


p.s. – Also I should mention that I totally had the same idea for a book, except instead of being two guys at a coffee shop they were two hot chicks in a mud wrestling contest having a poorly timed existential crisis.