Showing posts from November, 2013
Show all

Am I biased against Christian music?

- November 24, 2013
I'm a metal head. As you might expect, metal isn't always the most religion-friendly genre of music. The frontman for one of my favorite band s, Behemoth, has stood trial in Poland on blasphemy charges (the charges, filed by the Catholic church, were was dismissed). I listen to plenty of music that's overtly anti-Christian, and today I was scrolling through my YouTube subscriptions and found this gem: Hell was originally part of the "New Wave of British Heavy Metal" in the early 80s; they re-formed in 2008 and have a new album coming out this year – from which the song above is taken. Personally, I thoroughly enjoyed the video. One, because I like the NWOBHM style – they're clearly a throwback to bands like Judas Priest, Iron Maiden and even Black Sabbath, and the singer has some seriously impressive vocal skills. But I also really dug the occultish theatricality of the whole thing. I think too many mainstream bands have forgotten about the value of the
Post a Comment
Read more...

The atheist heroin addict who got schooled, why prayer is stupid, and my psychic connection to The Simpsons

- November 21, 2013
You may have spotted this viral video being spread around social networks: a 30-year-old man struggling with his faith, addicted to heroin and who had hocked his son's toys for drug money, receives a generous monetary gift the day after praying for help. It was too good to be a coincidence – it must have been God . Here's the vid: Years ago, my local Fox affiliate used to run reruns of The Simpons twice a day, five days a week. With the new episodes airing Sundays, that made for eleven episodes of the show each week. I watched them all. I was – and still am – a huge fan of the show. But a funny thing would happen. Sometimes, I would think of a random joke from a random episode. It'd just pop in my head. And then the next day, that would be one of the episodes that aired . Well obviously, when you're watching eleven episodes a week, certain ones are bound to repeat. But it happened with such frequency that it freaked me out for a while, and then eventually I just
Post a Comment
Read more...

Ted Cruz's dad on how atheism leads to child molestation

- November 13, 2013
Senator/dillhole Ted Cruz is an apple that evidently did not fall far from the tree. His father, Rafael Cruz, recently spoke here in Oklahoma and told an audience of gun nuts that atheism leads to sexual abuse: Let’s look, for example, at the behavioral consequences of these two foundations.Well, if there is nothing, if there is no God, then we are ruled by our instincts. There is no moral absolute, which means we operate by situational ethics. Of course, when there are no moral absolutes leads us to sexual immorality, leads us to sexual abuse, leads us to perversion and, of course, no hope. No hope! You hear that, atheists?! No hope! No hope for you! Well, here's the problem with that whole "God gives us moral absolutes" thing: nobody has direct, objective access to the mind of God. At best, even if (for the sake of discussion) we were to grant that the Christian God is real and does indeed have a standard of moral absolutes, God's messages are inevitably
Post a Comment
Read more...

- November 13, 2013
Skepticism is about the serious business of doing science, which combines open-minded curiosity with rigorous methodology. Of course what happens is that whenever skeptics point out a lack of rigorous methodology the true believer claims that we are trying to kill their curiosity. – From Steve Novella He's talking about Deepak Chopra's penchant for pseudoscience, but I think it's an apt description of theologians as well.
Post a Comment
Read more...

Toward a science of morality?

- November 10, 2013
I listened with great interest during the recent exchange between Lawrence Krauss, Dan Dennett, and Massimo Pigliucci, particularly the section in which they discussed the increasingly popular thesis (at least among popular gnu atheists) that morality can be a science – that it has objectively right and wrong answers that can at least in principle be answered by empirical data. I capped this off with a read of Richard Carrier's take on it *, as well as Pigliucci's responses to Carrier over at Rationally Thinking . It's likely that none of these conversations would be occurring without Sam Harris' controversial book The Moral Landscape . I've always been intrigued by Harris' ideas, but being a bit of a novice myself on the whole meta-ethics thing, I can only really take what seems the most sensible to me. For the most part, I've agreed with folks like Harris, Carrier, and Michael Shermer, and I confess that I've been a bit dismissive toward people like
Post a Comment
Read more...

- November 06, 2013
Okay, so, y'know how I was doing this review of Randal Rauser's book? Well, I got a new guitar , Battlefield 4 on my totally sweet gaming PC, and I've been spending more time thinking on more broad (and to me, more interesting) philosophical issues. I watched a great talk between Massimo Pigliucci, Dan Dennett and Lawrence Krauss that has spurred some deep thought and inspired some new content that I'll have up soon. Long story short, I haven't really had the interest to finish Randal's book. It's yet another apologetics book , for crying out loud. How many of these stupid books do I really need to waste my time on? Besides, if I've learned anything, it's that after I take the time to read and deconstruct one book, some theist will come along and tell me that of course I shouldn't have wasted time on that book, because such-and-such book is the really sophisticated one. There's no winning with some sheeple. In any case, the mighty Trist
Post a Comment
Read more...

Do you really need to wash produce before you eat it? 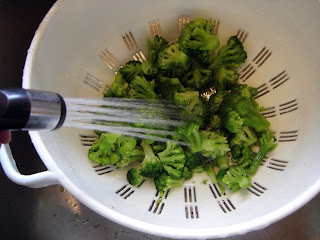 Why? I'm curious about something. We generally take it as a given that we should wash produce before we eat it. But I've never actually seen any evidence that washing produce at home makes it safer to eat. I'm highly skeptical that rinsing produce under cool water would be sufficient to wash away bacteria or pesticide residue in the first place, and I have never seen any evidence that ingesting trace amounts of (most) bacteria or pesticide residue produces any long-term health consequence. In the cases where bacteria has contaminated produce, it's either inside the produce itself or washing isn't enough to get rid of the bacteria (case in point: surface-contaminated bean sprouts). It seems like most regulations deal with the handling of produce before it's shipped, and I can't find a lick of research that shows that washing produce at home improves food safety at all. Google Scholar and PubMed were dry, mostly with studies about food saf
Post a Comment
Read more...
More posts