William Lane Craig on what God is made of 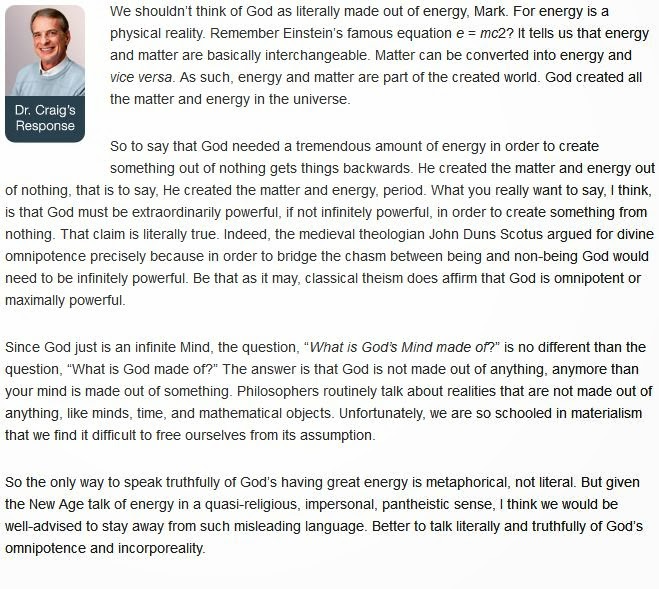 This strikes me as exemplifying the central problem with theism: that it's so ill-defined.


If we would presume to contemplate theism from an intellectually honest perspective, we would try to decide what kind of universe we would expect to live in if theism were true; then we would do the same for naturalism; and finally we would compare those expectations to the real world. But when we do that we find theistic expectations failing to match reality over and over again. Now, I know perfectly well (from experience as well as from cogitation) that you can never make headway with theists by claiming “If God existed, He would do X, and He doesn’t” (where X is “prevent needless suffering,” “make His existence obvious,” “reveal useful non-trivial information to us,” “spread religious messages uniformly over the world,” etc.) Because they have always thought through these, and can come up with an explanation why God would never have done that. (According to Alvin Plantinga, our world — you know, the one with the Black Death, the Holocaust, AIDS, Hurricane Katrina, and so on — is “so good that no world could be appreciably better.”) But these apologetic moves come at a price: they imply a notion of theism so flexible that it becomes completely ill-defined. That’s the real problem. Craig’s way of putting it is to suggest that God is “like the cosmic artist who wants to splash his canvas with extravagance of design.” That’s precisely why naturalism has pulled so far ahead of theism in the intellectual race to best model our world: because it plays by rules and provides real explanations for why the world is this way rather than that way.