- July 30, 2014
I cringe every time I hear the pseudo-word "mansplain". It's hardcore feminist slang for when a man comments on women's issues in some purportedly unenlightened manner, and it exemplifies the kind of black and white thinking and reactionary antagonism that characterizes a small but vocal subset of modern feminists in that the term exists to broadly undermine any sort of discourse that doesn't kowtow to an idiosyncratic point of view. Anyone who dares disagree is immediately branded and marginalized, further reinforcing the tribal groupthink that led to the creation of such a deplorable term in the first place.

Anyway, though. It's because of this: 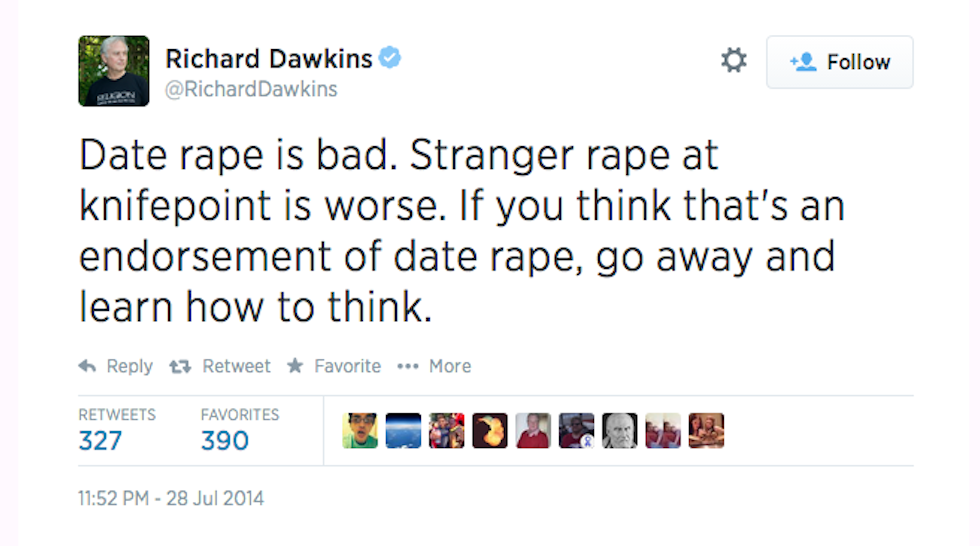 Which led to this article by blogger Erin Gloria Ryan:

As usual, a little context clarifies the issue. So, here's Richard Dawkins' in his own words, as part of a rather fantastic essay:


I now turn to the other Twitter controversy in which I have been involved this week.

'"Being raped by a stranger is bad. Being raped by a formerly trusted friend is worse." If you think that hypothetical quotation is an endorsement of rape by strangers, go away and learn how to think.'

That was one way I put the hypothetical. It seemed to me entirely reasonable that the loss of trust, the disillusionment that a woman might feel if raped by a man whom she had thought to be a friend, might be even more horrible than violation by a stranger. I had previously put the opposite hypothetical, but drew an equivalent logical conclusion:

"Date rape is bad. Stranger rape at knifepoint is worse. If you think that's an endorsement of date rape, go away and learn how to think."

These two opposite hypothetical statements were both versions of the general case, which I also tweeted:

"X is bad. Y is worse. If you think that's an endorsement of X, go away and don't come back until you've learned how to think properly."

The point was a purely logical one: to judge something bad and something else very bad is not an endorsement of the lesser of two evils. Both are bad. I wasn't making a point about which of the two was worse. I was merely asserting that to express an opinion one way or the other is not tantamount to approving the lesser evil.

In other words, people have different opinions about what constitutes a greater or lesser moral evil; Dawkins simply says people expressing their opinion one way or the other does not imply that they endorse what they perceive to be the lesser evil. Seems perfectly sensible to me, and a far cry from "Saying with laughable certainty that rape can be neatly categorized and quantified in terms of 'bad,' and that certain categories always affect victims more profoundly than other categories", as Ryan charged.

But hey, who am I to question someone who uses sophisticated terms like "yellthinker" and "mansplaining"? It's always easier to draw lines in the sand than it is to engage in rational discourse, and what kills me the most about this kind of black and white, reactionary thinking is that the overwhelming majority of us are on the same side on these issues. Perhaps it'd be wiser to treat each other with a modicum of charity.


p.s. - On a side note, this shows why Twitter is not exactly the ideal place to attempt to engage people in civil debate on controversial and sensitive topics.