- August 13, 2014
There's an old saying that when you're a hammer, everything looks like a nail. So what happens when, despite violent crime being at a 44-year low, the Department of Defense is allowing local law enforcement agencies to acquire its surplus tactical armament? The answer is precisely what happened in Ferguson, MO — police confronted unarmed protesters with rubber bullets and tear gas while brandishing body armor and assault rifles based on the M-4 Carbine. This is a picture of police in Ferguson, from a poignant article in Business Insider: 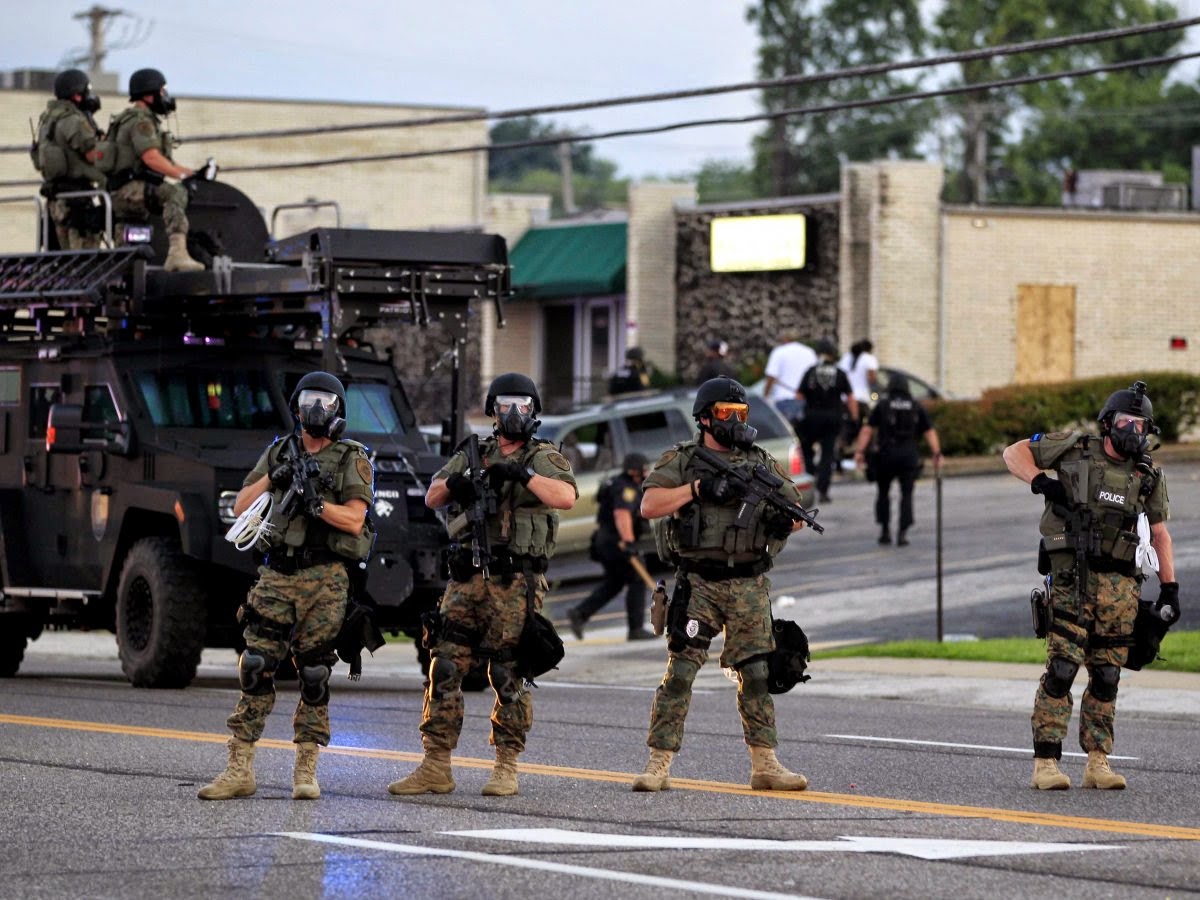 One could be forgiven for thinking that these men do not look at all like American police officers. Indeed were it not for the "Police" sticker slapped on the front of their body armor, they could be mistaken for any arbitrary paramilitary force. Give police a soldier's armament, and you'll convince them that they are soldiers. And if they're urban soldiers, the streets become their battlefield, and everyone looks like a potential enemy combatant.

This isn't some idle, slippery-slope conjecture; it's happening. Heavily armed border police have killed 19 Mexicans for the crime of throwing rocks. The ACLU has documented seven people being killed, and 47 being injured, by unnecessary SWAT raids which, as John Stossel notes, are now being used primarily to arrest nonviolent drug offenders, with a big margin for error:


SWAT raids are dangerous, and things often go wrong. People may shoot at the police if they mistake the cops for ordinary criminals and pick up guns to defend their homes against invasion. Sometimes cops kill the frightened homeowner who raises a gun.

Stossel also argues, rightly, that this affects all of us — not just, as some conservatives would like us to believe, people behaving badly:


It took only [90 minutes] for authorities to deem [comedian Joe Lipari] a threat and authorize a raid by a dozen armed men. Yet, says Lipari, "if they took 90 seconds to Google me, they would have seen I'm teaching a yoga class in an hour, that I had a comedy show."

Lipari has no police record. If he is a threat, so are you.

But while this affects us all, in the wake of Michael Brown's death it's become clear how critical an issue this is for minorities in America. The aforementioned ACLU report found that minority communities were disproportionately targeted for these violent raids. In a sobering article for The Concourse, Greg Howard contrasts the violence against young black Americans with the hullabaloo over "open carry" laws championed by white ultra-conservatives:


There are reasons why white gun's rights activists can walk into a Chipotle restaurant with assault rifles and be seen as gauche nuisances while unarmed black men are killed for reaching for their wallets or cell phones, or carrying children's toys.

Our Constitution guarantees us the right to peaceably assemble, and the freedom of the press. This week in Ferguson, peaceful protesters and journalists alike were pelted with rubber bullets and tear gas by paramilitary police. The freedom of the press, in particular, exists to protect the interests of civilians by forcing transparency of the state. When journalists are threatened with arrest and assaulted by police, there is no one to hold police accountable for questionable actions they may take against civilians.

With surplus military gear still pouring into police departments, this trend is unlikely to change any time soon unless we stand against it. What can we do? We can call our elected officials, and partner with the ACLU. And just for the hell of it, I went ahead and created a petition at Whitehouse.gov, which you can sign here.