What color is that damn dress? No color at all.

- February 27, 2015
Tonight the internet's been ablaze with an image of this hideous dress: 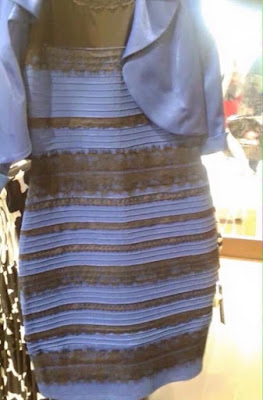 The thing is, people are having a difficult time agreeing on what color the dress is. I don't know why some people perceive the dress differently — I initially saw it as white and gold, while my wife insisted it was blue and black. The actual color of the dress, apparently, is blue and brown.

Notwithstanding this rather odd optical artifact, this is a good reminder of the fact that color doesn't actually exist. Well, at least if by 'exist' you mean something like 'a property that inheres in objects'. Color is the result of interactions between wavelengths of the electromagnetic spectrum, the cones in our eyes, and the neural circuitry of the brain.

What color we perceive something to be depends on a myriad of factors: the ambient lighting, what colors are adjacent to each other, and even our prior knowledge of color relationships. There are big philosophical implications here. If I say, "the grass is green", from the perspective of cognitive science it is a true statement because we have color concepts in our minds and those concepts play a crucial role in how we represent the world. But from the perspective of neuroscience, there is no "green" in the grass, nor is there "green" in your brain. A statement at the neural level is contradicting a statement at the cognitive level. The school of philosophical thought that views these two perspectives as complimentary and equally valid is called noneliminative physicalism.

Add to this the fact that we see colors differently in different situations, that culture and gender play a role in our color perception, and that some people can even perceive far more colors than most of us, and it's easy to see that color is not just something out there, as we generally imagine it to be, but an emergent phenomena of mind that results from a complex interplay between our embodied brains and the world around us.