Showing posts from August, 2015
Show all

It's my position that the entire enterprise of theology has contributed absolutely nothing whatsoever of value to humanity in its entire history. Not only has it not provided an iota of useful or necessary knowledge in any human endeavor, but it hasn't even come any closer to answering any of the questions it asks in the first place. Are theologians any closer to demonstrating unequivocally which religion is the correct one? Which sect of that religion is the correct one? Has theology ever cured or treated any disease, fed the poor, raised the standard of living for human beings, or led to peaceful co-existence? "But Mike," I can already hear them saying, "that's not the job of theology; just because it doesn't give us scientific knowledge doesn't mean it's worthless. Theology brings people closer to God, helps them find meaning in their lives, gives them comfort, and helps them navigate difficult issues of faith." Or something al
Post a Comment
Read more... 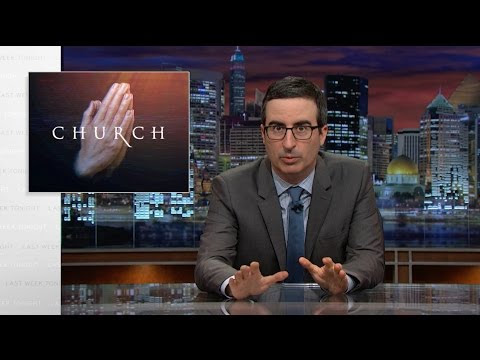 I give huge kudos to John Oliver for this scathing expose on the harmful fraud perpetuated by many televangelists, faith healers, and 'prosperity gospel' preachers.
Post a Comment
Read more...

Ignoring his own behavior, Randal Rauser implores Christians and atheists to be nicer to each other

If there's anything that grinds my gears, it's sanctimonious hypocrisy. I didn't like it when thrice-divorced conservatives complained that legalizing gay marriage would ruin 'traditional marriage'. I don't like it when Christians lecture us on the evils of sex before (and outside of) marriage when the statistic show they indulge as much as anyone else. Sanctimony is obnoxious, and so is the almost inevitable hypocrisy that follows. So when Randal Rauser writes an article for Slate which calls the diplomatic relationship between atheists and Christians "a total disaster", bemoans the "general deterioration in the public square of civil discourse", and tells us that "my call is to invite atheists into real conversation, to make space for their ideas, to try to understand the world as they do, and to be shaped by the resulting exchange", one might get the impression that Randal is one of the people who is actually working in his ow
Post a Comment
Read more...

Hang around in Christian apologetic circles enough, and you're likely to hear something like this: "My belief in God is rationally justified on testimony that I hold as properly basic; that is, I do not need any additional evidence to rationally assent to Christian belief". This was formalized and popularized in modern theological circles by Alvin Plantinga in his book Warranted Christian Belief. An excerpt: Suppose a Reformed epistemologist believes the great things of the gospel on the basis of the sensus divinitatis and IIHS; suppose he notes, further, that his belief and that of many others is accepted in the basic way (where, of course, accepting p on the basis of testimony is one way to believe p in the basic way). Suppose he further comes to see or believe that God intends his children to know about him and to know the great things of the gospel, but also that it isn’t possible for enough of us to know enough about him by way of inference from other beliefs
Post a Comment
Read more...

A blast from my uber-Christian past

I don't remember what sparked it, if anything, but for whatever reason I was thinking about the 90s Christian pop band DC Talk . I was a teenage evangelical when they made the transition from totally goofball hip-hop to fairly respectable alternative rock . As a teen who was pretty obsessed with early-era Pearl Jam, Soundgarden, and other such alt-rock megabands but who — like many evangelical teens, I imagine — wrestled with the guilt of listening to secular music, I dug "Jesus Freak". But honestly, I was more of a Jars of Clay fan, and I never really gave up listening to secular rock. The side of guilt was just the cost of listening to music I liked, I guess.  Then last night I was on Facebook and spied some of my religious friends talking about some event going on at Church on the Move , a pretty good-sized contemporary evangelical church here in Tulsa. Just for shits and giggles, I watched one of the sermons (well... some of it). It was pretty standard evange
Post a Comment
Read more...

America's gun culture is beyond ridiculous

This past week there have been three stories about shootings that I've happened upon. The first is a police officer who shot an unarmed teen (a white teen, in a rare change of news) to death. The teen was allegedly in possession of marijuana, and the officer claimed he shot the unarmed teen in self-defense; the autopsy, however, showed that the fatal entry wound entered from the back. Then we have just-released video tape of a police officer being charged with manslaughte r after he shot an unarmed black man... ready for this... eight times ... while the man was on the ground. The officer fired 12 times, and hit the victim ten times. Eight of those were after the victim had fallen to the ground. It's a small miracle that the officer is being charged at all, and while it seems like a clear-cut case of murder, an attorney buddy of mine informed me that a manslaughter conviction is much more likely to stick: Then there was yet another a movie theater shooting , the seco
Post a Comment
Read more...
More posts