Something that really puzzles me about the Ark Encounter

- July 13, 2016
Friendly Atheist has had some coverage of Ken Ham (of Answers in Genesis and Creation Museum fame) and his organization's new Young-Earth Creationism monstrosity, the $100-million+ Ark Encounter. They took quite a few pics from inside the 'replica', but these in particular caught my attention: 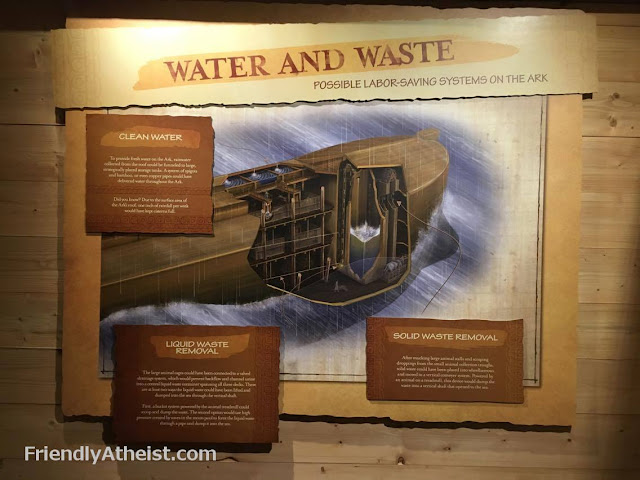 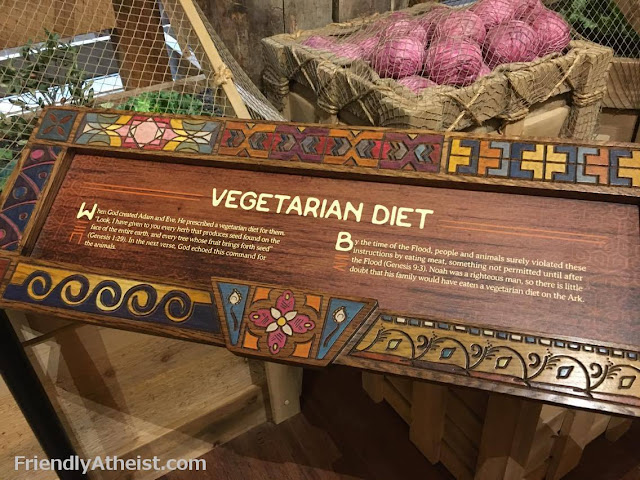 Basically this is saying that prior to the Flood, God didn't 'permit' humans or animals to eat meat. Let's set aside for a moment the oddity of suggesting that animals had the ability to understand and violate divine moral commandments and think instead about their anatomy. Essentially this implies that God either a) changed animals' anatomy while they were on the Ark, or b) changed it after the Flood. Because as any trivially educated person knows, animals aren't carnivorous (or not) because they decide to be, but because their biology mandates it to be.

Here's what gets me: if you're just going to say that God magically changes animals' anatomy at the drop of a hat, then why concoct this elaborate explanation for how they ate and pooped? Why not just say that for 40 days and nights, God made it so none of the animals would have to eat or poop at all? Why not say that God made Noah and his family's bellies full for the entire duration of the Flood?

This kind of ad hoc explanation shows what kind of severe cognitive dissonance Young-Earth Creationists are dealing with. Over the years, they've encountered (no pun intended) plenty of challenges to the plausibility of both the Flood and the Ark itself, and it seems like they just decided to conjure up answers to whichever ones seemed most problematic. The best part is that their answers just boil down to magic anyway, so they really could have 'answered' any possible challenge to their narrative by suggesting that God just poofed this or that scenario into being. Concocting an elaborate explanation for something, like how the poop was removed, probably just makes them feel a bit more scientific even though there's no particular reason for them to argue that Noah even needed to deal with animal poop. After all, Noah didn't need to deal with obviously carnivorous dinosaurs, reptiles, and mammalian predators eating other animals because God poofed them into being vegetarians.

Here's some food for thought, though. Anyone not deeply steeped in the YEC Kool-Aid can see the myriad of problems with their ad hoc reasoning, but this is common among 'sophisticated' theologians as well. My favorite example is William Lane Craig arguing that the probability of Jesus' resurrection happening by natural means is very low, but his probability of being resurrected by supernatural means is very high. Well, of course it is. As soon as you invoke supernatural magic, from the creation of the universe to walking on water, you can "explain" anything you want.