It's not a caricature of Christianity if it's true

- October 12, 2016
I've often found myself perplexed at how, in my nearly ten years of blogging (starting with The Apostasy, which became this blog in '09), Christians are chomping at the bit to engage in esoteric semantic dissections of philosophical arguments, and yet when I challenge the basic logical coherency of fundamental Christian doctrines... crickets. I can write a post about the Kalam Cosmological Argument and wrack up nearly 100 comments. I write a post saying that Christian doctrine is absurd, and I get nine comments — all from people who agree with me. A similar but less polemical post garnered nothing but an echo chamber.

I could spend the afternoon digging through Disqus and my blog archive to find more examples, but this is a regular pattern. Christian keyboard warriors have (apparently) spent a lot of time reading the esoteric apologetic philosophies of William Lane Craig or Ed Feser, but they seem either unprepared or unwilling to offer a similarly rigorous defense of the tenets of their own faith.

Now, in fairness, comments on my blog hardly represent a scientific sample. Maybe my experience is in part due to the microcosm of the internet in which I've placed myself through my writings. However, this avoidance is not a new experience for me — it was actually instrumental in my deconversion. Following my reading of Hebrews (which I discuss in both linked posts), my faith was deeply shaken. I simply could not make sense of what I'd read. I sought books, had several conversations with a couple of pastors, and scoured the internet (this was in the 90s, so web resources were a bit more limited). For the life of me, I could not find direct, concise answers to my questions. So, I did what I think anyone in my shoes would have done: I trusted my own judgment. I had read as broadly and as critically as I knew how, and the most uncomfortable answer was also the most prescient: if Christian theology looks nonsensical and incoherent, it's because it is nonsensical and incoherent.

The result of all this is that I have developed a fairly cynical view of Christian theology. So I see quotes like this famous one from Richard Carrier, and I'm sympathetic: 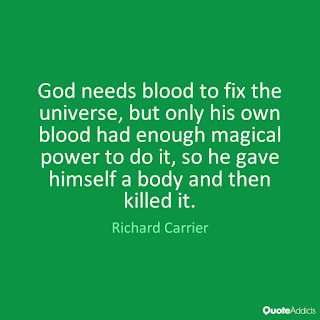 Christians might object that this is a "caricature" that overlooks some illuminating theological nuances. But in all my years of engaging with Christians — from laypersons to pastors to academics — I've yet to hear anything remotely approaching a rebuke. I hear a lot of bluster about a lack of charity and whatnot, but it seems to me that Carrier's quote is a perfectly accurate summary of what Christians actually believe. Sure, Christians don't like to phrase it that way, because it sounds ridiculous. They prefer the romance of "Christ died for our sins". But what does that even mean? How does an omnipotent being die? How does Christ's "blood" being shed on a Roman torture device "atone" for "sin"? If Jesus and God are the same being, isn't he literally sacrificing himself to himself to fulfill the terms of his own covenant? And why does God care whether people assent to the historicity of the Bible for his "sacrifice" to work?

If this is a caricature, I'm dying to know why. Really. Please. Enlighten me. Because as far as I can tell, this is literally what Christian theology entails, and in nearly 20 years of searching and dialogue I have never been offered a concise, straightforward answer to what to me seems like pretty fundamental questions about Christianity.

Instead, I get dodges like these:
I'm more than willing to hear someone attempt to explain Christian doctrine to me, to illuminate how I lost my way, to offer some guidance in properly understanding Hebrews. I doubt anything like that is going to happen, because I don't think Christians understand their own doctrine. The "divine mystery" is, indeed, part of the faith. That's just not good enough for me. I think the basic tenets of Christian doctrine — sin, atonement, covenantal salvation, the Trinity, etc. — are completely ridiculous. And at this stage of the game I'm willing to believe that if it sounds ridiculous and it's like pulling teeth to get a straightforward, coherent explanation of it, it's because it is ridiculous.