I am really confused about grace

- July 24, 2017
Randal Rauser has published a book entitled What's So Confusing About Grace?, in which he navigates the theological nuances of Christian soteriology in a manner intended for the layperson. You can read his post about the book here.

I considered commenting on the topic of grace on Randal's blog post, but I have to respect that this book is quite clearly not intended for atheists like me; it's written for Christians who are confused about what they are supposed to believe. Launching a debate about soteriology in the comments of Randal's announcement post would have been discourteous and inflammatory. Instead, I thought I'd share my thoughts here—not about the book, which frankly I'm not interested in reading since I am clearly not among the target audience—but about the topic of "grace" in general.


At first glance the Gospel seems straightforward: "For God so loved the world that he gave his only begotten son."

But while Randal quickly turns his attention to more doctrinal issues—what particular things you need to believe (if any), whether deeds matter, etc.—I'm stuck mulling over basic conceptual issues, the ambiguities of which were major catalysts in my deconversion. 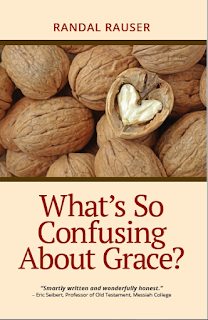 Let's start with the basic scripture quoted. What does it mean for an omnipotent being to "give" something? Can an omnipotent being really even make sacrifices? How can God be his own son? And why did God need to "give" us his son (who is also himself)—which I generally take to mean "sacrificed on the cross"—in order to forgive us of our sins? Why did God bother with several ineffectual covenants first (see the Old Testament)? Why did God choose such a relatively primitive, isolated, and seemingly arbitrary time and place in history to reveal the one true path to salvation to humanity? And doesn't the idea of "sin" seem rigged? I'm destined to sin as a birthright, and that alone sets me apart from God—possibly for eternity. The only way to erase sin from my eternal soul is to accept God's "grace", which apparently means that God didn't have to send himself as his own son and die for crimes I hadn't done yet (since I didn't exist), but he did because he loves me and doesn't want to keep me out of Heaven for believing the wrong thing.

The book of Hebrews explains how Christ's "sacrifice" (to whatever extent omnipotent deities are capable of sacrifice) was connected to the Mosaic covenant, and reading that book put me on the fast track to deconversion. It's just ridiculous on its face. Essentially, the Hebrews had a "covenant" (sort of a contract of salvation) with God which required a priest to ritualistically kill and animal in a holy temple as atonement for their discretions (namely, disobedience of God's written commands, detailed throughout several books of the Old Testament). But because reasons, this covenant was never going to be good enough. So God sent his only son (he's God, so theoretically he could have infinitely more sons) to take on the role as both a sinless high priest and as the perfect sacrifice that could fully atone for sins. Now, the rules are different and instead of killing a sheep, you can just ask God to forgive you—and if you're sincere, he will. Why couldn't God have done that in the first place, you ask? Why does God need you to repent anyway, since he knows you're a fallible human? I learned that as a Christian, you're just not really supposed to ask these questions.

Of course, this new covenant doesn't really solve the issue, because people are still buttholes "sinners", which means that God is going to solve everything at some indeterminate point in the future when he returns to Earth in the form of his son, a.k.a. himself. There will be a big war with the devil or something, Earth is destroyed and remade for some reason, and then everyone who believed correctly and/or was a good person (you might have to read Randal's book to be clear on that one) gets to live in blissful serenity forever and ever while the Bad People are either tortured horribly forever or, if you're more theologically liberal, mercifully snuffed out of existence. God, being omnipotent, could presumably just do all that instantaneously, but he has a mysterious "divine plan" or something which necessitates all this. Just don't ask for details, mkay?

I guess I was wrong. That's not confusing at all!