"Mad Max" is a terrific game, and a timely warning

- July 10, 2017
I'm currently spending my sparse free time with the video game Mad Max, which was released to modest reviews in 2015, but I overlooked it in the onslaught of triple-A games released in the same period. I purchased it on sale last year, but it sat idly in my Steam library, not so much as installed. I fixed that last week.

As a game, Mad Max is essentially a mishmash of more innovative predecessors. The hand-to-hand combat is borrowed generously from the Arkham series. The driving (there's a lot of driving) is a lot like Rage, but I like the driving in Mad Max better. The progression and world has a distinctive Ubisoft flare, liberally using well-established tropes from series like Assassin's Creed and Far Cry. It shouldn't be a special game, being that it stands on the shoulders of giants. But that's only a deficiency insofar as it feels familiar, and that familiarity makes it easy to pick up and play.

Playing the game now seems a bit more timely than it might have if I'd played it in 2015. In the world of Mad Max, the "wasteland" is a result of some kind of apocalyptic nuclear war following the depletion of the world's oil reserves. Given that the original film followed on the heels of the 1970s oil crisis and amid fears of nuclear escalation with the Soviet Union, it was timely then. And given that I'm playing the game as the Trump-led U.S. government is led by climate change deniers (including, most egregiously, the very head of the EPA) and ignoramuses—most offensively Trump himself, who has set in motion the U.S. withdrawal from the Paris Climate Accord—the game seems, despite its absurdity, to be a warning. 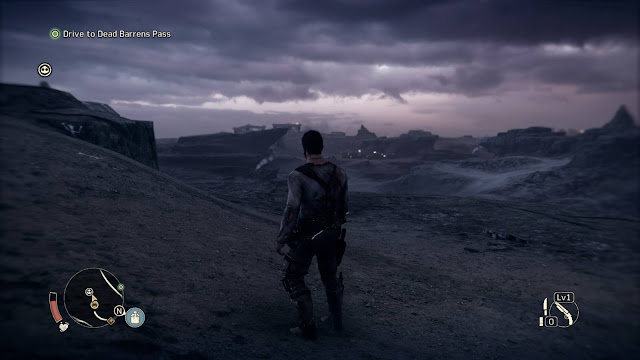 The prevalence of athropogenic climate change denial is rooted in a partisan political identity where it has become fashionable for willfully ignorant conservatives, and for better or for worse has nothing to do with the actual facts of the matter the evidence for and severity of which are beyond dispute in the scientific community. While the cartoonish dystopia of Mad Max is just a fantasy, the dire consequences of climate change are all too real, and the real-world signs too prescient.