Straw-manning feminists because it's cool

- July 24, 2017
Recently, Michael Shermer (of whom I'm generally a fan) claimed that Sandra Harding, a philosopher of science and influential feminist, had called Isaac Newton's "Principia Mathematica" a "rape manual."

Today, I read a similar statement from an anonymous source shared on Facebook which claimed that feminist and philosopher Luce Irigaray called the equation e=mc2 a "sexed equation" because she argues that "it privileges the speed of light over other speeds that are vitally necessary to us". The original source of this claim is apparently a criticism of her work by Alan Sokal and Jean Bricmont published in 1997.

Both cases were repeated by Richard Dawkins (of whom I'm also generally a fan) in a 1998 essay entitled "Postmodernism disrobed."

In both of these cases, the feminists were using what educated adults should know as a "rhetorical device." In the former case, Harding was using sarcasm in her criticism of Sir Francis Bacon; in the second case, Irigaray was taking a critic's argument to its (absurd) logical conclusion. 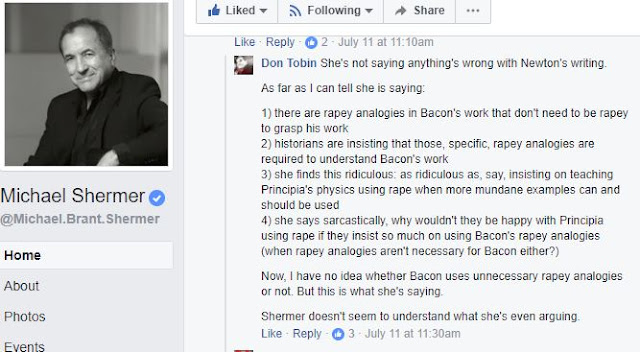 I'm no stranger to hearing hasty generalizations about "the patriarchy" and other postmodern feminist tropes, but I nonetheless consider myself a feminist (my wife and I had a serious conversation the other day about whether it's appropriate for men to refer to women as "girls"); as with any set of ideas, there will always be a bell curve with extreme views on either end, and sometimes people use those extreme views to try and discredit the whole enterprise. As a contrasting example, I recognize that men do face harsher prison sentences than women for the same crimes, and are much less likely to be awarded primary custody of their children in a divorce. But that doesn't mean I endorse the "men's rights activist" movement and everything it represents.
But what's disturbing to me is how uncritically these women's arguments were straw-manned, and how credulous so many readers were in accepting such misrepresentation simply as an excuse to bash feminists and, by proxy, dismiss or discredit feminism. As always, the hardest but most important part of being a good skeptic is questioning things that reinforce your own beliefs.