The supplement industry is an argument against libertarianism

- July 01, 2017
Broadly speaking, I have two basic gripes with libertarianism. The first is that it assumes that in a free and unregulated market, people will act rationally and in their collective self-interest; research in behavioral economics has shown that to be false. The second is that, at least in my experience, the term 'government' is used as a catch-all term to describe some sort of monolithic entity, failing to make relevant distinctions between (say) an authoritarian regime and a democratically elected representative government comprised of civilians.

Now before someone stops reading there and tries to get pedantic over libertarianism, it's worth pointing out that libertarianism is itself a fluid and contentious concept. In my experience, a lot of people who identify as libertarians don't actually believe in a fully unregulated laissez faire economy (or, if they do, they're pragmatic enough to know it's a fantasy); lots of them are just republicans who can't get on board with the social views of religious conservatives or feel that the modern conservative leadership has become subservient to special interests, so "libertarian" becomes sort of a broad catch-all for "I support conservative economics but liberal social policies." There's no single universally agreed upon idea of what makes someone a libertarian, but they tend to advocate positions typical of economic conservatism—in particular, a free-market economy with no or very minimal regulatory oversight.

I'll come back to these broad ideas later. But first I want to talk about supplements.

A short history of snake oil 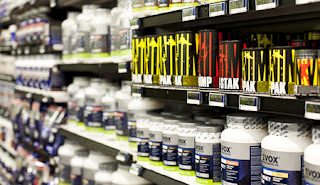 The Council for Responsible Nutrition (an organization of industry insiders) claims that the supplement industry contributes over $120 billion to the U.S. economy. In gross sales, it's roughly a $30 billion industry—one that is almost totally unregulated. Back in 1994, senator Orrin Hatch (R-Utah) and Tom Harkin (D-Iowa) led the charge for the Dietary Supplement Health and Education Act, or DSHEA, which was signed into law by then-president Bill Clinton. While Clinton claimed the act brought "common sense to the treatment of dietary supplements under regulation and law," all it really did was make the FDA virtually powerless to stop supplement companies from selling products that are worthless at best and dangerous at worst. (It's worth noting that the DSHEA didn't so much deregulate the industry as prevent stricter regulations in the first place.)

Unlike pharmaceutical companies, supplement companies do not have to subject the ingredients in their supplements to controlled research (side note: the regulatory issues in the pharmaceutical industry are a topic for another day), and they do not have to prove either their safety or their efficacy before putting them on the market. The only caveat to their products is that they cannot make medical claims: that is, they cannot claim that their product can diagnose, treat, or prevent any medical disorder.

So for example, you might have knee pain (it's common). You might decide that you don't want to take an NSAID like ibuprofen, so you opt for something more "natural" (whatever you think that means). You find a supplement called "Joint Optimizer" that has shark cartilage and glucosamine in it. The product does not say it will alleviate your knee pain or fix the underlying cause of your knee pain; instead it uses vague language like "supports healthy joint function", along with a disclaimer that "these statements have not been evaluated by the FDA."

You might reasonably ask what "supports healthy joint function" is supposed to mean. Does the product reduce inflammation, like an NSAID? Does it help your body to rebuild damaged cartilage? Does it strengthen tendons and ligaments? If you seek clear answers to these questions, you won't find them. Much of what the supplement industry does is use vague words like "supports" and "promotes" without telling you exactly how the "active" ingredient is supposed to actually work.

Let's take another example: branched-chain amino acids, or BCAAs. The first such supplement I pulled up in a Google search said that it "promotes strength and muscle repair." What does that mean, exactly? Does it make you stronger? Does it help your body repair microtrauma of muscle tissue from strength training? Again, the vague language at play allows the customer to use their imagination to fill in the blanks.

There's another big problem with the supplement industry: research. Because supplement companies are profit-oriented, the high costs of well-designed studies are generally a deterrent to conducting them—especially since they may not support the manufacturer's claims. Instead, universities are generally left to slowly trickle out research. In some cases, large supplement companies may sponsor research, leading to ethical questions about the reliability of the results.

Scientific research, in general, faces a replication crisis; namely, due to the abundance of poorly-designed studies, exceedingly few of them can be replicated. Good research is rare, and determining the safety and efficacy of a supplement can take literally decades. Anything remotely positive, including animals studies, are used by supplement marketers to add an air of credibility to their products. A comprehensive review by the British Medical Journal of over a hundred supplements found a dearth of quality research and poor evidence to support the claims associated with supplement use.

And why would supplement companies want to fund good research? What's the value in spending millions to find your product doesn't work, when consumers have already made the supplement industry a $30 billion Goliath and seem eager to both believe the dubious claims of marketers and fill in the blanks with their own imaginations?


The lack of government regulation is a problem

This is an example of the free market fucking over consumers, for several reasons. The supplement industry is essentially legally allowed to con people into buying worthless and possibly even dangerous garbage, and the FDA is powerless to prevent companies from conning consumers. Because it can take so long to scientifically determine the efficacy of ingredients (and because many consumers are skeptical of science anyway), by the time we really know that a supplement doesn't work there may be a glut of poorly-designed research that appears to support the supplement anyway. Or, if the public can be persuaded that a supplement is ineffective, it might be too late anyway—the supplement industry is always looking for hot new ingredients to put into new products, so evidence that an older ingredient is ineffective might not matter anyway.

The idea behind a laizzes-faire economy is that no government intervention should be needed here; the market solves the issues. Ineffective or dangerous products will be rejected by consumers, forcing companies to stick with safe, effective ones. But this makes the mistaken assumption that consumers are rational—the truth is that the placebo effect prevents consumers from being reliable assessors of a product's efficacy, and safety issues may be either very broad or very narrow. For example, a product may be toxic at a certain dosage, or there may be some unknown drug interaction. It can be prohibitively difficult, if not impossible, to ascertain the safety and efficacy of supplements without well-controlled, replicable research—which we know that producers have no market incentive to fund. Even if consumers could weed out ineffective or dangerous products, the long-term financial and health impact could be substantial. Making matters even more absurd, the FDA's limited power to withdraw supplements over "adverse event reports" may resulting in relatively safe products being removed from the market, since AERs are anecdotal.

We need a regulatory body, but it's important to understand what that needs to be. The FDA is not an arm of an autocratic government, or some soulless entity of regulators looking to crush businesses. The FDA is comprised of civilians, the top tier of whom are appointed by democratically elected officials. The U.S. government is (at least in theory) "by, of, and for the people." That's quite different from the notion that we need an authoritarian government telling us what we can and cannot buy; rather, we need civilians working with independent researchers to help protect consumers from irresponsible and predatory products. And don't get me wrong—I'd be the first to tell you there are problems with the FDA. But the notion that a (mostly) laizzes-faire economy is the solution is one that, at least in this market segment, has proved a total failure.