Another depressing day in the Trump presidency 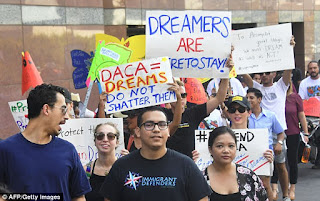 Earlier tonight, I was reading comments from conservatives on a Facebook post about Trump's planned dissolution of the DACA. If you're not familiar, the DACA was enacted by Obama to give children and young people brought into the US illegally by their parents or guardians more time to apply for citizenship. Since in many cases these people (referred to as "dreamers") were brought to the US very young, our soil is all they've ever known and deporting them is essentially sending them to a country that is totally foreign to them. The conservative commentators almost always referred to them as "illegals", blamed them for being a drain on the economy (which is objectively false), and cried, "no sympathy for dreamers!"

It's one of those moments where I recalled the Huffpo op-ed from Kayla Chadwick entitled, "I Don’t Know How To Explain To You That You Should Care About Other People." The disagreement here isn't just political. If you really think that deporting 800,000 young people who were brought here under the age of 16, who've lived and worked here for many years, is any kind of solution to anything... I mean, I just don't even know where to begin.

Because it's not just that you'd be objectively wrong about the economic impact of these immigrants or the costs of deporting them—we all know from the 'backfire effect' that facts aren't likely to change your mind, anyway—it's that I don't know how to reach someone who has a fundamentally different idea about what it means to live in a democratic society. Someone who sincerely thinks that these people don't deserve to live in America because their moms and/or dads brought them across the border, and who scapegoats immigrants for their own economic anxieties.


This is the Trump presidency. He spends most of his time complaining on Twitter, and he isn't doing anything to improve health care, balance the budget, or address stagnant middle class wages. He keeps going on about this stupid wall that no sensible person thinks will ever exist, and earlier today he tacitly threatened to end trade with China. But don't worry conservatives, he's sure trying his best to get rid of the child immigrants, the Muslims and cross-dressers! That's what'll bring those coal jobs back!