- September 27, 2018
I'm trying to process the hearings from this afternoon. I'm trying to process how entrenched everyone became in their partisan camps; indeed, chances are your mind was made up before the hearing began, and chances are that the news sources you followed simply served to entrench you more deeply in your point of view.
My opinion going into this was that Ford was credible, but that her inability to produce compelling evidence would ultimately soften the impact on the nomination itself. Shockingly (ha), I still believe that is the case. As I understand it, several more women have come forward with accusations. I'm sure they will be dismissed as politics by the right, and the left will demand justice for (alleged) victims. Whether any of it will be enough to force or compel Trump to select an alternate nominee remains to be seen.
I'll refrain from saying much more on who should be believed, because you already made up your mind. But what I found distressingly mundane, unfortunately, is the double standard in how Ford and Kavanaugh each had to behave. 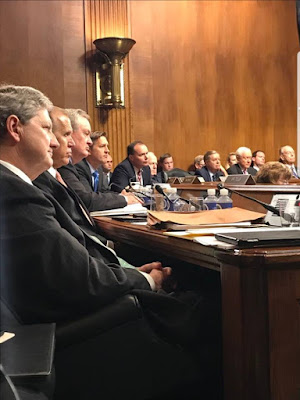 In the last election, Clinton had to remain calm, articulate, polite, graceful, and dispassionate. She had to "smile." Trump hurled insults, belittled her, spoke over her, interrupted her, and (as he still does on a daily basis) basically behaved like an overgrown man-boy.
Ford was calm, composed, thoughtful, focused, and thorough. Kavanaugh raged, cried, rambled, pouted, blamed the Clintons (implying that Ford is somehow connected to them), and refused to answer direct questions.
I know why lots of women don't come forward, because in the last few weeks I've witnessed many women I know personally come forward with disturbing stories of how they were harassed, demeaned, molested, or abused by men. If you wonder how a young man like Brock Turner could feel so entitled to rape a woman— and be so utterly unsympathetic to the harm he inflicted upon her—and wonder how any rational human could take seriously his claim that he shouldn't be punished because he was attempting "outercourse," look no further than the panel of powerful men with unsympathetic eyes staring down at Ford during her testimony.
Men have generations of fraternal power to insulate them from the consequences of their abuses of women. Women have their voices. I, for one, will listen.