My name's Mike Doolittle, but everyone calls me Mike D. I de-converted from evangelical Christianity in the late 90s, spent a few years as a "deistic agnostic" and finally, after reading Stephen Hawking's A Brief History of Time, settled into atheism. I don't claim to know all the answers. But to me, it's not so much about the answers – it's how you explore the questions. In this blog, I attempt to explore the world from the standpoint of a healthy skeptic, always standing by the famous quote by Carl Sagan: "Extraordinary claims require extraordinary evidence." I'm not necessarily out to de-convert people; I just want to provoke thought and, with any luck, get feedback from readers that provokes my own.

The name "A-Unicornist" is a play on the term "atheist". "Atheist" seems a peculiar term; there are an infinite number of things about which we lack belief. Most of us don't believe in leprechauns, Zeus, or astrology. But we don't bother creating a label for each of those things. 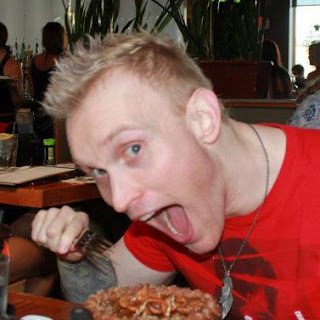 I was born on July 19, 1979 in Milwaukee, WI. I currently reside in Tulsa, OK, where I've worked as a personal trainer for the past 8 years. In my spare time I read a lot of popular science, play a lot of guitar, and listen to a lot of heavy metal. The b&w picture on the "about me" section makes me look a lot more serious than I usually am. This picture is a little more accurate.

I wouldn't be putting my ramblings out on the interwebs if I didn't want anyone to read it. I welcome constructive praise, criticism and commentary of all stripes.

I have zero tolerance for vitriol, insults (whether directed at me or at a visitor), or spam. If you can't submit to common courtesy, I will not issue warnings or try to talk sensibly with you – I'll immediately delete your comment and ban your IP address.

More importantly, my blog is a platform for my rants, not yours. Sometimes I get visitors who want to spam the comment sections with small essays over their favorite pet arguments. Here's a pointer: blogging is free – get your own! When a comment reads like an essay unto itself, that's not a dialogue -- it's a monologue. Don't do it.

Fortunately, the overwhelming majority of people who have offered their feedback have been both intelligent and perfectly courteous, and I aim to keep this blog a place where people can disagree without being disagreeable.

You can message me via the fan page on Facebook:

A final note: if you have your own blog, don't hesitate to shamelessly promote it on my blog in the comments. Now, I want comments to stay reasonably on topic, so if that's all you're doing, well, don't do it. But don't hesitate to mention any related writing you've done, and by all means email me and tell me about your blog. I'm always keeping my eyes peeled for new stuff.

Why are you an atheist?

If I had to give a concise answer, it's because the world makes more sense to me when I take God out of the picture. Everything about how the world works, how we attain knowledge, and how we live fulfilling lives becomes vastly simpler and clearer when we aren't trying to make God fit into it. It's like fitting a square peg into a round hole – and even though the peg doesn't fit, there are countless rationalizations to explain that it does fit even as the contrary evidence is right before our eyes.

Why are you atheists so angry?

I'm not angry in general, and I don't think most atheists are angry people. I'm angry about certain injustices and falsehoods that are perpetuated by religion and its followers, but I think that's a justified anger. If you're not angry about injustice, then you're probably part of the problem. But I have found over the years that many believers have difficulty separating criticism of ideas with criticism of people. Yes, belief in God, per Dawkins, is delusional. That's a criticism of an idea, not a criticism of you. I often point to Isaac Newton – one of the most brilliant minds who ever lived, and yet dedicated most of his life to the pseudoscience of alchemy. Being wrong about one thing doesn't make you stupid, and being smart doesn't make you right about everything.

Did you leave the Christian church because you were angry at God? Or perhaps because you didn't want to be held accountable for your sin?

I left the church because, after I spent a great deal of time studying Christian theology, I found everything about it to be utterly nonsensical. The historical evidence does not add up; the theology is full of paradoxes and internal contradictions; and I found that most churchgoers reinforce their faith not through education, but through groupthink. I was fortunate to be able to distance myself from the church long enough to critically examine my own beliefs.

Have you read such-and-such book by so-and-so? If you did, you'd clearly see the error of your ways.
Firstly, I spent my first 19 years as a Christian, and a good nine years thereafter as a "spiritual but not religious" theist. I've read countless books, articles, essays and blogs defending religion and spirituality from a litany of perspectives. Since my deconversion to atheism, I've read several books that have been given to me by well-meaning believers, some of which I've reviewed here such as Francis Collins' The Language of God. All of them use the same types of arguments and are just as easily refuted. If you have an argument to make, make it – don't just tell me I need to read your favorite book. But that does bring me to the next question....

I have an argument that totally undermines atheism. What do you have to say about that?

Please, use the search button. And the "New to the A-Unicornist?" tab at the top of the page. I've spent years talking with theists. I've read many apologetics books and heck, as a believer I spent many years making and defending those arguments. So before you trot out the cosmological argument, or the design argument, or the objective moral argument, or quote your holy book of choice, or say that atheists can't have any meaning in their lives and expect me to discuss it with you... use the search button. The archives are full of topical posts on just about every subject imaginable, many of which have very lengthy discussions in the subsequent comment threads. I'm not going to rehash the same arguments for every new visitor who comes along.

Imagine that you were the perfect, omnipotent, all-knowing Lord and Creator of the universe. You decided that you were going to give one -- just one -- book to humanity. It would be their moral compass, an insight into their nature and into yours, and act as a guide for how they could live rightly and walk a path that would lead their souls into an eternity with you. Obviously, the first thing you'd want to put in there are some totally unscientific, archaic behavioral codes for menstruating women, and for pregnant women after they give birth. You'd want to be sure to help them regulate slavery, and specify how badly they were allowed to beat their slaves. And of course you'd want the book to be chock full of mythology -- a creation myth, a flood myth, a fictional exodus, and hagiographical stories about how your loyal armies killed the shit out of everyone who dared to worship the wrong gods. There's a point here about the Bible that, in my estimation, really canno
Read more...

In part 1, I pointed out the absurdity of believing that the Bible is the divinely inspired word of God. That leads to closely related, but no less important point: most of what is in the Bible is simply not true . And in some cases, that actually impacts Christian theology rather profoundly. Adam and Eve did not exist. Overwhelming evidence from every field of biology points to humans evolving from a population of no fewer than 10,000 individuals. Any way you slice it, it's simply impossible that we can from one man and one woman. That's not an innocuous detail, either: the entirety of Christian theology is built upon Adam and Eve being real people. I'm fond of this quote from Pastor Tim Keller: “[Paul] most definitely wanted to teach us that Adam and Eve were real historical figures. When you refuse to take a biblical author literally when he clearly wants you to do so, you have moved away from the traditional understanding of the biblical authority.  If Adam d
Read more...